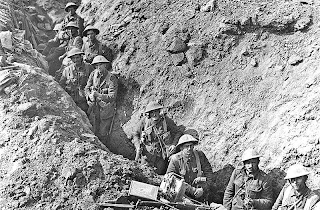 On 6 December 1915, the senior military commanders of Britain and France met at the headquarters of French Field Marshal Joseph Joffre to discuss their strategy to win the war.

The failures of Gallipoli and Salonika had led the governments of France and Britain to believe that the war could be won only on the Western Front. Only if Germany were defeated could the war end in 1916.

The new British commander in France, Sir Douglas Haig, had been ordered by his government to co-operate with Joffre, but he was not under Joffre’s orders and could make his own decisions.

The French had called up vast reserves of men and had converted much of their industry to producing weapons. Joffre was confident that a new attack would break the German army.

Haig too had large reserves of men and weapons becoming available. He also wanted to use these to defeat Germany, but was unconvinced by Joffre’s idea of yet another infantry attack.

A major recruitment drive in Britain by Lord Kitchener, boosted by outrage over the German execution of Nurse Cavell and other events, had led to large numbers of volunteers.

Many of the volunteers joined up as “Pals” units. Groups of workmates, social clubs or villages joined together and insisted on serving together in the same battalion or company.

Lloyd George had transformed the munitions industry in the previous eight months. There were now more shells and more guns than ever before.

Joffre suggested a combined British-French attack on either side of the Somme River where the chalk hills were dry and open. After some hesitation, Haig agreed. But he asked for time to consider the best way to make the attack.

Unknown to the British and French, the Germans had their own plans. The Germans would move faster when the spring weather came in 1916.