On this day in history 29 July 2005 Discovery of dwarf planet, Eris

On this day in history
29 July 2005
Discovery of dwarf planet, Eris

Eris (minor-planet designation 136199 Eris) is the most massive and second-largest dwarf planet known in the Solar System. It is also the ninth-most-massive known body directly orbiting the Sun, and the largest known body in the Solar System not visited by a spacecraft. It is measured to be 2,326 ± 12 kilometers (1,445.3 ± 7.5 mi) in diameter. Eris is 27% more massive than dwarf planet Pluto, though Pluto is slightly larger by volume. Eris's mass is about 0.27% of the Earth's mass.[10][17]

Eris was discovered in January 2005 by a Palomar Observatory–based team led by Mike Brown, and its identity was verified later that year. It is a trans-Neptunian object (TNO) and a member of a high-eccentricity population known as the scattered disk. It has one known moon, Dysnomia. As of February 2016, its distance from the Sun is 96.3 astronomical units (1.441×1010 km; 8.95×109 mi), roughly three times that of Pluto. With the exception of some comets, Eris and Dysnomia are currently the second-most-distant known natural objects in the Solar System, the farthest object being V774104 discovered in November 2

Because Eris appeared to be larger than Pluto, NASA initially described it as the Solar System's tenth planet. This, along with the prospect of other objects of similar size being discovered in the future, motivated the International Astronomical Union (IAU) to define the term planet for the first time. Under the IAU definition approved on August 24, 2006, Eris is a "dwarf planet", along with objects such as Pluto, Ceres, Haumea and Makemake,[22] thereby reducing the number of known planets in the Solar System to eight, the same as before Pluto's discovery in 1930. Observations of a stellar occultation by Eris in 2010 showed that its diameter was 2,326 ± 12 kilometers (1,445.3 ± 7.5 mi), not significantly different from that of Pluto.[23][24] After New Horizons measured Pluto's diameter as 2372±4 km in July 2015, it was determined that Eris is slightly smaller in diameter than Pluto. 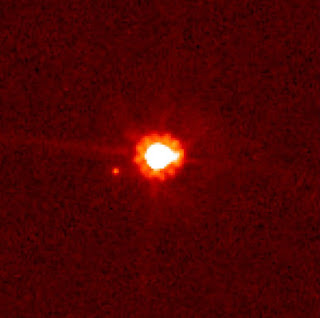