William Archibald Spooner (22 July 1844 – 29 August 1930) was a long-serving Oxford don, notable for absent-mindedness, and supposedly liable to mix up the syllables in a spoken phrase, with unintentionally comic effect. Such phrases became known as spoonerisms, and are often used humorously. Many spoonerisms have been invented and attributed to Spooner. 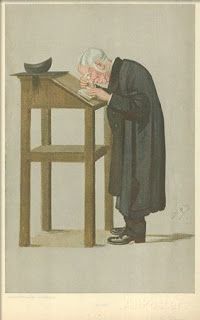 Spooner has become famous for his (real or alleged) "spoonerisms", plays on words in which corresponding consonants, vowels, or morphemes are switched. Few, if any, of his own spoonerisms were deliberate, and many of those attributed to him are apocryphal. Spooner is said to have disliked the reputation gained for getting his words muddled.

The Oxford Dictionary of Quotations (3rd edition, 1979) lists only one substantiated spoonerism: "The weight of rages will press hard upon the employer." In a 1930 interview, Spooner himself admitted to uttering "Kinkering Congs Their Titles Take" (Conquering Kings...) Spooner called this hymn out from the pulpit in 1879.

Many other quotations, "probable and improbable, were invented" and attributed to Spooner, including:

"It is kisstomary to cuss the bride" (...customary to kiss the bride)
"I am tired of addressing beery wenches" (weary benches)
"Mardon me padam, this pie is occupewed. Can I sew you to another sheet?" (Pardon me, madam, this pew is occupied. Can I show you to another seat?)
"You have hissed all my mystery lectures, and were caught fighting a liar in the quad. Having tasted two worms, you will leave by the next town drain" (You have missed all my history lectures, and were caught lighting a fire in the quad. Having wasted two terms, you will leave by the next down train)

Spooner is supposed to have committed other absent-minded gaffes. He was said to have invited a don to tea, "to welcome Stanley Casson, our new archaeology Fellow". "But, sir," the man replied, "I am Stanley Casson". "Never mind," Spooner said, "Come all the same."

On his death, The Times recorded that "He was not afraid of conversation."
Posted by Rupert Matthews at 01:59