On this day in history
12 July 1730
Birth of Josiah Wedgwood, potter 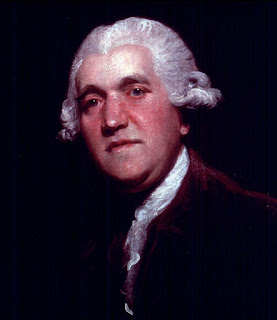 Josiah Wedgwood (12 July 1730 – 3 January 1795) was an English potter who founded the Wedgwood company. He is credited with the industrialisation of the manufacture of pottery; "...it was by intensifying the division of labour that Wedgwood brought about the reduction of cost which enabled his pottery to find markets in all parts of Britain, and also of Europe and America." The renewed classical enthusiasms of the late 1760s and early 1770s was of major importance to his sales promotion. His goods were always considerably more expensive than those of his fellow potters. Every new invention that Wedgwood produced - green glaze, creamware, black basalt and jasper - was quickly copied. Having once achieved perfection in production, he achieved perfection in sales and distribution.

A prominent abolitionist, Wedgwood is remembered too for his "Am I Not a Man And a Brother?" anti-slavery medallion. He was a member of the Darwin–Wedgwood family, and he was the grandfather of Charles and Emma Darwin.

Wedgwood belonged to the fourth generation of a family of potters whose traditional occupation continued through another five generations. Wedgwood's company is still a famous name in pottery today, and "Wedgwood China" is sometimes used as a term for his Jasperware, the coloured stoneware with applied relief decoration (usually white), still common throughout the world.

Wedgwood is credited as the inventor of modern marketing, specifically direct mail, money back guarantees, travelling salesmen, carrying pattern boxes for display, self-service, free delivery, buy one get one free, and illustrated catalogues. Wedgwood is also noted as an early adopter/founder of managerial accounting principals in Anthony Hopwood's "Archaeology of Accounting Systems."

For the further comfort of his foreign buyers he employed French-, German-, Italian- and Dutch-speaking clerks and answered their letters in their native tongue.
Posted by Rupert Matthews at 23:17