The East–West Schism, also called the Great Schism and the Schism of 1054, was the break of communion between what are now the Eastern Orthodox and Catholic churches, which began in the 11th century and remains to the present day.

The ecclesiastical differences and theological disputes between the Greek East and Latin West pre-existed the formal rupture that occurred in 1054. Prominent among these were the issues of the source of the Holy Spirit, whether leavened or unleavened bread should be used in the Eucharist, the Bishop of Rome's claim to universal jurisdiction, and the place of the See of Constantinople in relation to the Pentarchy.

In 1053, the first step was taken in the process which led to formal schism: the Ecumenical Patriarch of Constantinople Michael I Cerularius ordered the closure of all Latin churches in Constantinople, in response to the Greek churches in southern Italy having been forced to either close or conform to Latin practices. According to the historian J. B. Bury, Cerularius' purpose in closing the Latin churches was "to cut short any attempt at conciliation".

In 1054, the papal legate sent by Leo IX traveled to Constantinople for purposes that included refusing to Cerularius the title of "Ecumenical Patriarch" and insisting that he recognize the Pope's claim to be the head of all the churches. The main purpose of the papal legation was to seek help from the Byzantine Emperor in view of the Norman conquest of southern Italy and to deal with recent attacks by Leo of Ohrid against the use of unleavened bread and other Western customs, attacks that had the support of Cerularius. Historian Axel Bayer says the legation was sent in response to two letters, one from the Emperor seeking assistance in arranging a common military campaign by the eastern and western empires against the Normans, and the other from Cerularius. On the refusal of Cerularius to accept the demand, the leader of the legation, Cardinal Humbert of Silva Candida, O.S.B., excommunicated him by placing the Papal bull of Excommunication on the altar of Hagia Sophia during Saturday afternoon divine liturgy. In return Cerularius excommunicated Humbert and the other legates. This is generally recognised as marking the split between the Catholic and Orthodox traditions in Christianity.

The validity of the Western legates' act is doubtful, since Leo had died and Cerularius' excommunication applied only to the legates personally. Still, the Church split along doctrinal, theological, linguistic, political, and geographical lines, and the fundamental breach has never been healed, with each side sometimes accusing the other of having fallen into heresy and of having initiated the division. The Crusades, the Massacre of the Latins in 1182, the West's retaliation in the Sacking of Thessalonica in 1185, the capture and Siege of Constantinople in 1204, and the imposition of Latin patriarchs made reconciliation more difficult. Establishing Latin hierarchies in the Crusader states meant that there were two rival claimants to each of the patriarchal sees of Antioch, Constantinople, and Jerusalem, making the existence of schism clear.

Several attempts at reconciliation did not bear fruit. In 1965, Pope Paul VI and the Ecumenical Patriarch of Constantinople Athenagoras I nullified the anathemas of 1054, although this nullification of measures taken against a few individuals was essentially a goodwill gesture and did not constitute any sort of reunion. Contacts between the two sides continue: every year a delegation from each joins in the other's celebration of its patronal feast, Saints Peter and Paul (29 June) for Rome and Saint Andrew (30 November) for Constantinople, and there have been a number of visits by the head of each to the other. The efforts of the Ecumenical Patriarchs towards reconciliation with the Catholic Church have often been the target of sharp criticism from some fellow Orthodox 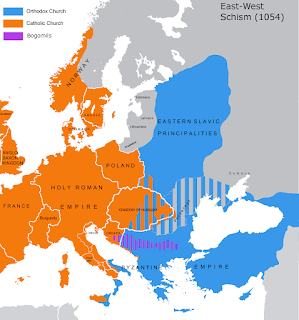 Posted by Rupert Matthews at 00:00