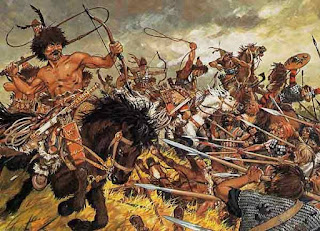 The Sack of Aquileia occurred in 452, and was carried out by the Huns under the leadership of Attila.

A year after Attila's defeat at the Battle of Catalaunian Fields, Attila launched an invasion of Italy, passing through Pannonia into Venetia, where he laid siege to Aquileia. Jordanes states that the city was well defended, to the point where Attila was considering withdrawing. Indeed, Ian Hughes suggests that since Aetius was unable to blockade the Julian Alps, he instead reinforced the city garrison to force Attila into a siege, or otherwise risk Roman forces cutting off his potential retreat. The siege lasted for some time, and Jordanes states that as Attila was considering withdrawing, the city fell in a renewed assault and he razed it to the ground. Attila then proceeded to raid Italy, with Aetius able to do little more than harass Attila at best. It was only when an embassy including Pope Leo I arrived that Attila finally ended his invasion, likely as a result of famine, disease, and an Eastern Roman Army approaching the Hunnic settlements near the Tisza.

Before its destruction, Aquileia was a center of government (with an imperial residence), commerce and finance (with a mint), military defense, and Christianity (with a bishop).Its destruction and Attila's subsequent unimpeded ravaging of the province of Venetia (modern Veneto and Friuli) paved the way for the rise of Venice, which within a few centuries replaced and even surpassed it in importance.

Posted by Rupert Matthews at 01:42