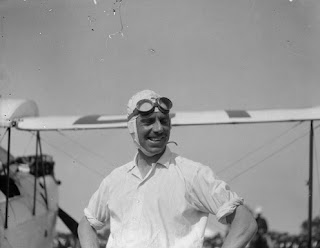 Captain Sir Geoffrey de Havilland OM CBE AFC RDI FRAeS (27 July 1882 – 21 May 1965) was a British aviation pioneer and aircraft engineer. His Mosquito has been considered the most versatile warplane ever built, and his Comet was the first jet airliner to go into production.

Built with money borrowed from his maternal grandfather,[1] de Havilland's first aircraft took two years to build before he crashed it during its first very short flight at Seven Barrows near Litchfield, Hampshire in December 1909.[2] He built a fresh biplane, making his first flight in it from a meadow near Newbury in September 1910.[3] A memorial plaque presently marks the event. Subsequent designs were even more successful: in 1912 he established a new British altitude record of 10,500 feet (3.2 km) in an aircraft of his design, the B.E.2. Geoffrey was the designer and his brother Hereward was the test pilot.

In December 1910, de Havilland joined HM Balloon Factory at Farnborough, which was to become the Royal Aircraft Factory. He sold his second aeroplane (which he had used to teach himself to fly) to his new employer for £400. It became the F.E.1, the first aircraft to bear an official Royal Aircraft Factory designation. For the next three years de Havilland designed, or participated in the design of, a number of experimental types at the "Factory".

In January 1914, de Havilland was appointed an inspector of aircraft for the Aeronautical Inspection Directorate. Unhappy at leaving design work, in May he was recruited to become the chief designer at Airco, in Hendon. He designed many aircraft for Airco, all designated by his initials, DH. Large numbers of de Havilland-designed aircraft were used during the First World War, flown by the Royal Flying Corps and later the Royal Air Force.

Airco was bought by the BSA Company, but BSA was interested only in using the company factories for car production. Raising £20,000, de Havilland bought the relevant assets and in 1920 formed the de Havilland Aircraft Company at Stag Lane Aerodrome, Edgware, where he and his company designed and built a large number of aircraft, including the Moth family. In 1933 the company moved to Hatfield Aerodrome, in Hertfordshire. One of his roles was as test pilot for the company's aircraft. He was believed to have said "we could have had jets" in reference to the ignoring of jet engine possibilities prior to the start of the 1939–45 world war. His company's aircraft, particularly the Mosquito, played a formidable role in that war. In 1944 he bought out his friend and engine designer Frank Halfords engine design consultancy company, forming the de Havilland Engine Company with Halford as head. Halford had previously designed a number of engines for de Havilland, including the de Havilland Gipsy and de Havilland Gipsy Major. Halford's first gas turbine design entered production as the de Havilland Goblin powering de Havilland's first jet, the Vampire.

De Havilland controlled the company until it was bought by the Hawker Siddeley Company in 1960.
Retirement and death.
Posted by Rupert Matthews at 01:21