Window and the RAF 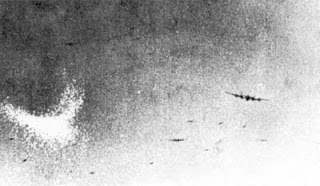 The first new device that Harris planned to use in 1943 went by the name of “Window”, a radar-jamming device. Work on Window had begun almost as soon as radar was itself being developed. Since it was thought that the Germans were some years behind the British in producing radar it was, at first, given a low priority. It was not until 1941 that trials began and by early 1942 the system was perfected.

Window consisted of bundles of paper coated with thin metal foil and cut into strips the length of which matched the wavelength of the German radar waves. As the bundles were dropped from an aircraft they separated to form a vast cloud of metallic strips. When one of these came square-on to the German radar beam it sent back an exceptionally strong echo out of all proportion to its true size. Strips in other positions returned much smaller echoes.

At first it was intended that the air should be filled with Window strips so that the German radar was faced by a veritable blizzard of echoes. This would render the radar next to useless. If each bomber on a formation dropped one bundle of 2,200 strips each minute the jamming of German radar would be complete. This operation generally began about 60 miles from the target so that the short-range Wurzburg radar controlling flak and nightfighters around the target would be effectively jammed. This was especially useful if the bomber stream changed course at the last minute to bomb a target different from that which they had been seeming to head toward. It was considered impractical to jam the longer range Freya radar system as that would have involved dropping Window for the entire mission.

Later it was realized that a more sophisticated use could be made of Window. By carefully controlling the number of bundles dropped and the interval of time between the dropping, a single aircraft could give an echo mimicking that of a large formation. The Germans would, it was hoped, respond accordingly by sending their nightfighters to attack the nonexistent formation. The nightfighter crews would then be tired and low on fuel when the real formation came in.

As soon as Window was ready for use, it ran into a problem. The head of Fighter Command, Air Marshal Sholto Douglas, objected to its use. It was clear that the Germans would soon pick up the millions of strips and quickly deduce how they jammed the radar. The German bombers would soon be equipped with Window of their own to jam British radar during raids on British cities. The dispute went all the way to the War Cabinet with Harris wanting to use Window to protect his crews, and Douglas objecting. The War Cabinet decided that the risks outweighed the benefits.

Harris did not give up, however, and he repeatedly requested the use of Window. By the spring of 1943 he could argue persuasively that the bulk of the Luftwaffe bombers were operating over Russia and that few raids on Britain were taking place. He also pointed out that far more British bombers were now heading to Germany than had done a year earlier. On 15 July it was agreed that the benefits now outweighed the risks. Harris was given permission to use Window on an operation of his choice so that it could be evaluated. He chose Operation Gomorrah.

Posted by Rupert Matthews at 02:49