Ancient Greek Warfare - after the battle 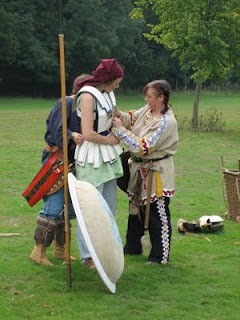 It is impossible to be certain when dealing with statistics from a time from which records have survived in only patchy form, but there are some clues as to how deadly hoplite warfare could be. In the instances from which figures survive, it would seem that about 5% of the victorious army was killed in the fighting, while up to 15% of the defeated would not survive the day.

This was carnage indeed for a battle that might have lasted only an hour or two from start to finish. The dense formations, close quarter fighting and lethal weaponry meant that casualties would inevitably be high. But given that most wars were settled in a single day, the death toll was not unsustainable. There were rarely long-drawn out campaigns in which battle followed battle and which led to civilian starvation and epidemic disease. Hoplite warfare ensured that campaigns were short, brutal and decisive.

The herald of the defeated city would then appear, usually later that same day, to arrange a truce and ask for the bodies of the dead for burial. Once this was agreed, the business of peace negotiations would begin. Most of the wars in ancient Greece were fought over disputed patches of border territory. The loser would hand over the disputed region, and both armies would go home to return to their usual jobs as potters, farmers or fishermen.

On rare occasions a war was more serious. The victor might impose tribute on the defeated, or even declare the defeated state to be absorbed into that of the victor. Sometimes the defeated were treated as little better than slaves, at other times they negotiated free status for themselves or even equal voting rights as citizens of the amalgamated state.