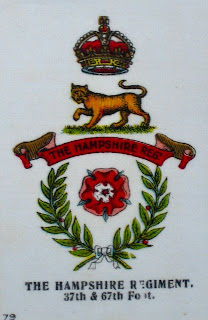 The Royal Hampshire Regiment was formed in 1881 and ceased to exist in 1992. However, the regiment has a much longer and prouder tradition than these dates would indicate. It has been one of the hardest fighting regiments in the British Army and has racked up a list of battle honours that is the envy of many
The regiment dates back to 1702 when Thomas Meredith was asked by Queen Anne to raise a regiment of infantry in Ireland, Meredith coming from a noted Anglo-Irish family. Within months Meredith’s Regiment was marching off to war against the French in Europe. As was the custom in the British Army at this date, the regiment continued to be known by the name of its colonel until 1747 when numbers were assigned instead. What had by then become Dejean’s Regiment thus became the 37th Regiment of Foot.
In 1758, the 20th Regiment of Foot was divided in two, with half the men mustering in as the new 67th Regiment of Foot. This new regiment was raised specifically to take part in the war against the French then raging in North America. The colonel tasked with raising the regiment was a 31 year old named James Wolfe, a man soon to be raised to the rank of Major General and put in charge of the siege of Quebec. Wolfe was killed at the moment of his triumph and the 67th Regiment lost its first colonel barely a year after being formed.
In 1782 the British infantry was reformed so that each regiment recruited primarily from one specific area, after which it was to be named. The 37th Regiment thus became the 37th North Hampshire Regiment while the 67th became the 67th South Hampshire Regiment. In 1881 another round of reforms saw all British infantry regiments standardised to have two regular battalions and two militia battalions, all based on a county. The 37th and 67th therefore joined to form the Hampshire Regiment, which was to become the Royal Hampshire Regiment in 1946. Officially the numbers of the 37th and 67th were done away with, but unofficially the 1st Battalion of the new regiment kept the tag 37th, while the 2nd Battalion was the 67th. In 1990 the Options for Change reforms saw the British army drastically reduced in size as politicians sought to save money after the end of the Cold War. The Royal Hampshire Regiment was amalgamated with the Queens Regiment to form The Princess of Wales’s Royal Regiment.
The Battle Honours gained by the Royal Hampshire Regiment, and by its predecessors the 37th and 67th Regiments, remain attached to the new Princess of Wales’s Royal Regiment. They tell the history of the regiment through the bloody battles and campaigns that the men have waged. The practice of a regiment having battle honours is an ancient one. At first it was left to the commanding officer of the regiment whether or not to award an honour to his men.
By the time the 37th Regiment was formed in 1702, however, it had become the custom to award an honour only if the regiment actually fired a volley of musketry at the enemy. Such honours remained in the gift of the colonel and were not officially recognised. Then in 1784 the army decided to allow regiments to embroider the names of Battle Honours on to their flags. This necessitated a formal list of Battle Honours recognised by the army. The 37th and 67th, along with all other regiments, hurried to get their list of honours officially recognised. Not all of the older, informal Battle Honours were recognised by the general staff. After 1784 a colonel had to apply to the general staff for permission to add a Battle Honour to his regimental list.
This system has remained in place down to the present day — except that in 1882 a special Battles Nomenclature Committee was set up to decide whether an action constituted a “battle” and, if so, whether any Battle Honours should be awarded for it. In addition to Battle Honours, there are also what are known officially as Theatre Honours. These are awarded when a regiment takes part in a campaign, but does not take place in any of the actions designated “battles”.
Traditionally the most impressive or important of the Battle Honours are embroidered on the flag of the regiment, painted on its drums and written on the drum major’s mace. This book follows that practice by concentrating on the Battle Honours that the Royal Hampshire Regiment chose to embroider on its flag, drums and mace. All the Battle Honours are featured in this book, but only those acknowledged by the regiment itself to be of prime importance are treated in depth.