The Spanish Armada - the Fighting Begins 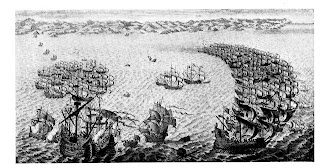 But before any serious fighting could begin, the courtesies and formalities inherited from the chivalric medieval period had to be observed. Medina Sidonia acted first by hoisting to the top of his mainmast a vast banner. This flag was embroidered with religious images and had been blessed on the altar of Lisbon Cathedral in a lengthy service before the Armada had set sail. Howard chose to issue a challenge in the English fashion. A pinnace was sent to dash forward at high speed. It got between the trailing tips of the crescent, then bore about and fired its gun at the enemy fleet. The pinnace was out of range of its tiny gun, but that did not matter. Defiance had been shouted in approved fashion. The formalities over, the battle began.

As with all the battles that were to follow, the scene is confused for historians by the fact that no one observer was in a position to see everything. The distance from tip to tip of the Armada was over a mile. The hulls and sails of the ships restricted the view of any man substantially.

Once the gunfire began, the smoke obscured vision even further. Gunpowder in the 16the century produced great billowing clouds of grey-black smoke that clung to the ground, or sea, and would not disperse unless blown away by a wind. Some land battles became so densely covered in smoke that the sun was blotted out and men could see barely 20 yards - a situation which gave rise to the phrase ‘the fog of war’. At sea things were rarely that bad as there was usually a wind of sorts blowing and in any case the guns were not so closely grouped nor as stationary as in land battles. Nevertheless, gunfire did make it very difficult to see what was going on.

This situation is made worse by the fact that some of the key players in the drama left no written account, either because they were later killed or because nobody asked them to do so. From reading the various accounts, however, it is possible both to follow the general outlines of what happened and to pick out some details.

The action began on the Spanish right wing. The majority of the English force, led by Howard, came rushing down in a straggling line ahead. They stayed at long range, using their culverins to fire at the Spanish while staying out of range of the enemy cannon. As they swept past the rear of Bertondona’s Squadron of the Levant, the English fired, then passed on to turn, return and fire again.

The impact of the English guns was impressive. It was not that they inflicted a huge amount of damage, when the fight was over it was found that they had not, but the psychological impact proved to be major. The men on the Spanish ships were accustomed to fighting a boarding battle, but this concentrated and prolonged gunfire was something new. Usually there would be one or salvoes of cannon fire before the boarding took place and the cannons were replaced by the pops of musketry and the ringing of edged weapons on armour.