The Supply System of the Macedonian Army under Alexander the Great 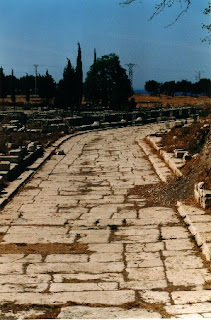 Philip had some years earlier banned the Macedonian army from using carts to transport food or equipment of any kind. Everything had to be carried by the men or on pack animals. The reasons for this were three fold.

First, carts could operate only on good roads. At the time of Alexander the only roads to have paved surfaces were those within towns and cities or the limited number of sacred roads that linked temples, shrines and cult centres. Processions moved along such roads and needed flat, secure paving to take the weight of the large carts that carried cult statues. Good as such roads were, they did not tend to go where armies would want to march.

The vast majority of roads were little more than strips of ground that were cleared of boulders, bushes and other obstructions. In wet weather they quickly deteriorated to quagmires interrupted by deep puddles. In dry weather they turned to dust that flew up in clouds of choking powder that got into noses, mouths and eyes. So irritating and penetrating could this dust be that “traveller’s eye” was a recognised complaint. In any case, such roads as there were existed only in the lowlands. Mountains were crossed by paths and tracks that no cart could traverse.

If the army had depended on carts for transport it would have been tied to lowland roads. That would be bad enough in territory that had been thoroughly scouted and efficiently mapped. But no army can rely on fighting over only such lands. By abandoning carts, the Macedonian army was freed to march over rough ground and high passes that were impassable to more traditional military forces.

A second problem with carts was their speed. The usual draught animal in ancient Greece as the ox. Oxen can plod along at only around 3.5 kilometres per hour. Moreover an ox can work for only five hours per day if it is to keep up a sustained effort. The resulting average daily speed of 17 kilometres was very slow. A fit man can easily sustain daily speeds of 30 kilometres or more. Relying on carts drawn by oxen would slow the army down considerably.

Even if horse-drawn carts were used, which could keep up with a man’s daily marching rate, there was a third problem. Until some anonymous genius of the early medieval period invented the horsecollar made from straw-stuffed leather and braced by metal fittings, the only horse collar available was the throat and girth harness. This has the unfortunate effect of exerting pressure on the horse’s windpipe. The harder the horse pulls, the more it is choked by the weight it is pulling. This put a strict limit on the amount of weight that a horse could pull. Bizarre as it may seem, this meant that a horse could actually carry on its back more than it could pull.