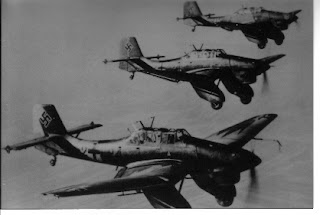 In his rise to power inside Germany, Hitler had used luck, skill, propaganda and violence - or the very real threat of it - to achieve his ends. It soon became clear that he was to use very much the same tactics in achieving his aims now that he was the Führer of the German people. For the luck and skill he would rely on his own talents and for the propaganda he could rely on the dark genius of Josef Goebbels. For the violence he turned to the armed forces of Germany, the Reichswehr, and at once realised that this instrument of war was quite simply not up to the job.

The Treaty of Versailles, which ended World War I was dictated to Germany by the victorious Allies. The numerous provisions, were prompted by the unshakeable belief that it had been Germany and her aristocratic, military elite which had started the war. If war were to be avoided in future, the authors of the treaty believed, Germany had to be stripped of any offensive power. Under the terms of Versailles, the German armed forces were to number no more than 100,000 men, none of whom could be conscripts, and were allowed neither tanks nor aircraft. The famously efficient Army General Staff was disbanded.

The new Reichswehr were composed of the Reichsheer, or army, and the Reichsmarine, or navy. The majority of the manpower was in the Reichsheer, which consisted of 2 Group Commands, 7 Infantry Divisions and 3 Cavalry Divisions. The Reichsmarine was so reduced in size that it was little more than a fisheries protection and coastguard service. The aim of Versailles was, simply, to stop Germany from having sufficient armed forces to be tempted into starting a war. The effect was to drive the German governments and military establishment towards finding new and imaginative ways of creating effective military power.

The rearmament of Germany after the catastrophic defeat of the Great War began before Hitler became Führer, but it was to gather pace and urgency once the Nazis were in power. Crucially, it was Hitler’s ambition for an aggressive foreign policy that not only gave the rearmament a timescale, but also pointed the direction which it took. This ambition and the restrictive military terms of the treaty were to have a direct bearing on the form of the new German war machine which Hitler was to create.

Less well-known clauses in the Versailles treaty committed the victorious Allies to reducing their own armed forces. These reductions were not on anything like the drastic scale imposed on Germany, but would have been significant if they had ever been carried out. However the idealistic euphoria for peace and the perceived benefits of the influence of the League of Nations which dominated thinking in 1919 soon wilted in the face of belligerent communism radiating from Soviet Russia and the practical needs of Britain and France to police their empires and colonies. In the event, the planned disarmament of the victorious nations never took place. This, of course, gave Hitler the ready-made excuse he needed for rearming Germany.

This is an extract from the book HITLER - MILITARY COMMANDER

Posted by Rupert Matthews at 02:19