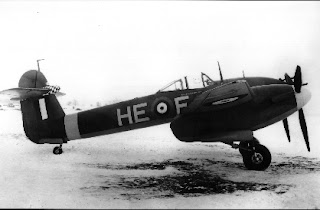 As preparations for D-Day advanced, it became clear that the existing Fighter airfields of Tangmere, Ford and Westhampnett in Sussex would be unable to cope with the large number of aircraft expected to operate from the county. The need for additional airfields had been recognised after the Dieppe Raid. On that occasion Fighter Command had gained and held air supremacy over the town and the sea offshore, but only by putting up vast numbers of fighters on a strict rota system. To be confident of achieving air supremacy over the much larger area over the Normandy beaches and English Channel woul would require far more aircraft, even given the depleted state of the Luftwaffe by the summer of 1944. It was to provide bases for these aircraft that the Advanced Landing Grounds (ALG) were constructed.

The ALGs were never intended to be permanent airfields. The runways were constructed of heavy-duty metal mesh laid down over the turf, while accommodation consisted of requistioned nearby houses and tents. There were to be four hangars at each ALG, but again these were of temporary constructions, known as blister hangars. Care was taken over selecting the sites, the ideal being a flat area of poor-grade farmland close to woodland where stores could be hidden from probing Luftwaffe eyes. There were not enough such sites to be found in Sussex, so some good quality farmland had to be sacrificed much to the annoyance of the local farmers.

Among the unsung heroes of Fighter Command were the runway repair crews of the ALGs. The metal spikes holding the runway mesh in position were constantly working loose, so the men had to rush out to hammer them back in at short notice. More than once they were at work even as aircraft came into land, the men scattering for a few seconds, then returning to work.

In December 1942 workmen started to clear the site just outside Bognor Regis, flattening out bumps and demolishing farm buildings in line with the runways. January 1943 saw work begin at Chailey, and in February at Selsey, Apuldram and Coolham. Cowdray Park had been a private airfield used by Lord Cowdray and his friends before the war, so this needed only to have metal mesh laid down for it to become an ALG. It was July 1943 before work began at Deanland. A grass air strip at Funtingdon had been cleared early in the war as an emergency landing strip for damaged aircraft and it was upgraded to be an ALG in September 1943. Two months later the old army base at Hammerwood began conversion to be an ALG. A final ALG was planned to be built at Pulborough, but it was never constructed.

Even while the ALGs were being constructed, squadrons were being moved into Sussex, or new ones formed. Both the ADGB and 2nd TAF ha bases in the county and the pace of activity quickened appreciably. The main targets for 2nd TAF were German military bases in northern France and the Low Countries, plus transportation links, railway locomotives and rolling stock and factories producing military equipment. Although the primary need was to prepare for the landings in Normandy, it was necessary to launch raids as if preparing for an invasion taking place around Calais so as to mislead the Germans.

Posted by Rupert Matthews at 01:34