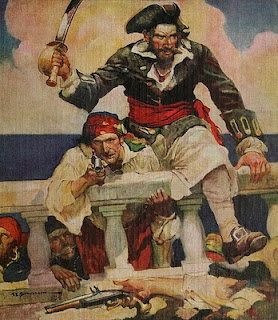 Pirates used fast, heavily-armed ships. They needed to be able to catch up with merchant ships, then defeat them if they fought back. Some pirates preferred to have small ships so they could hide in narrow inlets and creeks. Others chose larger ships with more guns. The ship needed enough space to carry food for the crew, ammunition for the guns and to store all the loot they stole.

This is a larger pirate ship carrying over 30 guns. There were cabins for the crew and storerooms for the food, drink and ammunition. The upper decks were kept clear so that the guns could be used at short notice.

You Must Be Joking
In the warm Caribbean ocean, seaweed and shellfish grew quickly on the bottom of ships. This slowed the ships down. Three times each year, pirates would drag their ships ashore to scrape off all the weed and shells. This was known as "careening".


Can You Believe It?
Pirates built their own ships.
NO. Most pirates stole ships If a pirate captured a ship which was better than his own, he would sell his old ship and keep the new one. Some pirates chose to buy or hire their ship from a pirate stronghold such as Port Royal or Tortuga.


Only the most successful pirates could attract a crew large enough to sail a big ship. Most pirates had small crews, so they used smaller ships. The hulls were often painted green so they would blend in to the green land when the pirates were hiding in creeks and inlets.
Posted by Rupert Matthews at 02:40