On 18 November 1302, Pope Boniface VIII issued the Papal bull Unam sanctam which some historians consider one of the most extreme statements of Papal spiritual supremacy ever made. The original document is lost but a version of the text can be found in the registers of Boniface VIII in the Vatican Archives.

Urged by faith, we are obliged to believe and to maintain that the Church is one, holy, catholic, and also apostolic. We believe in her firmly and we confess with simplicity that outside of her there is neither salvation nor the remission of sins, as the Spouse in the Canticles [Sgs 6:8] proclaims: 'One is my dove, my perfect one. She is the only one, the chosen of her who bore her,' and she represents one sole mystical body whose Head is Christ and the head of Christ is God [1 Cor 11:3]. In her then is one Lord, one faith, one baptism [Eph 4:5]. There had been at the time of the deluge only one ark of Noah, prefiguring the one Church, which ark, having been finished to a single cubit, had only one pilot and guide, i.e., Noah, and we read that, outside of this ark, all that subsisted on the earth was destroyed.
We venerate this Church as one, the Lord having said by the mouth of the prophet: 'Deliver, O God, my soul from the sword and my only one from the hand of the dog.' [Ps 21:20] He has prayed for his soul, that is for himself, heart and body; and this body, that is to say, the Church, He has called one because of the unity of the Spouse, of the faith, of the sacraments, and of the charity of the Church. This is the tunic of the Lord, the seamless tunic, which was not rent but which was cast by lot [Jn 19:23-24]. Therefore, of the one and only Church there is one body and one head, not two heads like a monster; that is, Christ and the Vicar of Christ, Peter and the successor of Peter, since the Lord speaking to Peter Himself said: 'Feed my sheep' [Jn 21:17], meaning, my sheep in general, not these, nor those in particular, whence we understand that He entrusted all to him [Peter]. Therefore, if the Greeks or others should say that they are not confided to Peter and to his successors, they must confess not being the sheep of Christ, since Our Lord says in John 'there is one sheepfold and one shepherd.' We are informed by the texts of the gospels that in this Church and in its power are two swords; namely, the spiritual and the temporal. For when the Apostles say: 'Behold, here are two swords' [Lk 22:38] that is to say, in the Church, since the Apostles were speaking, the Lord did not reply that there were too many, but sufficient. Certainly the one who denies that the temporal sword is in the power of Peter has not listened well to the word of the Lord commanding: 'Put up thy sword into thy scabbard' [Mt 26:52]. Both, therefore, are in the power of the Church, that is to say, the spiritual and the material sword, but the former is to be administered _for_ the Church but the latter by the Church; the former in the hands of the priest; the latter by the hands of kings and soldiers, but at the will and sufferance of the priest.
However, one sword ought to be subordinated to the other and temporal authority, subjected to spiritual power. For since the Apostle said: 'There is no power except from God and the things that are, are ordained of God' [Rom 13:1-2], but they would not be ordained if one sword were not subordinated to the other and if the inferior one, as it were, were not led upwards by the other.
For, according to the Blessed Dionysius, it is a law of the divinity that the lowest things reach the highest place by intermediaries. Then, according to the order of the universe, all things are not led back to order equally and immediately, but the lowest by the intermediary, and the inferior by the superior. Hence we must recognize the more clearly that spiritual power surpasses in dignity and in nobility any temporal power whatever, as spiritual things surpass the temporal. This we see very clearly also by the payment, benediction, and consecration of the tithes, but the acceptance of power itself and by the government even of things. For with truth as our witness, it belongs to spiritual power to establish the terrestrial power and to pass judgement if it has not been good. Thus is accomplished the prophecy of Jeremias concerning the Church and the ecclesiastical power: 'Behold to-day I have placed you over nations, and over kingdoms' and the rest. Therefore, if the terrestrial power err, it will be judged by the spiritual power; but if a minor spiritual power err, it will be judged by a superior spiritual power; but if the highest power of all err, it can be judged only by God, and not by man, according to the testimony of the Apostle: 'The spiritual man judgeth of all things and he himself is judged by no man' [1 Cor 2:15]. This authority, however, (though it has been given to man and is exercised by man), is not human but rather divine, granted to Peter by a divine word and reaffirmed to him (Peter) and his successors by the One Whom Peter confessed, the Lord saying to Peter himself, 'Whatsoever you shall bind on earth, shall be bound also in Heaven' etc., [Mt 16:19]. Therefore whoever resists this power thus ordained by God, resists the ordinance of God [Rom 13:2], unless he invent like Manicheus two beginnings, which is false and judged by us heretical, since according to the testimony of Moses, it is not in the beginnings but in the beginning that God created heaven and earth [Gen 1:1]. Furthermore, we declare, we proclaim, we define that it is absolutely necessary for salvation that every human creature be subject to the Roman Pontiff.
from
The Popes: Every Question Answered [Hardcover]
Rupert Matthews (Author)
Get your copy HERE 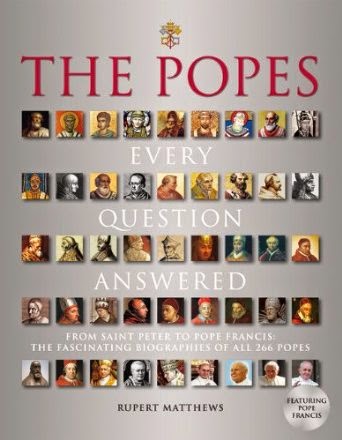 Posted by Rupert Matthews at 23:29