Building a Railway to Windsor

Building a Railway to Windsor

One result of the bitter battle between the GWR and LSWR was that Queen Victoria and Prince Albert made it very clear to all concerned, and to the public, that they had absolutely no view on the matter at all. The business of a railway to Windsor was entirely in the hands of the Commissioners who managed the Windsor Estates. This led to the curious situation where eminent men on all sides voiced views as to what was convenient for Her Majesty, or what was inconvenient, with absolutely no way of finding out what the Queen thought herself.

This gave the railway companies their chance. The Commissioners were known to be keen to make dramatic improvements to the Castle and its surroundings to benefit the Royal Family and to make a visit more impressive for visiting foreign heads of state. They were also known to have virtually no money to pay for the desired works. It was the GWR that first suggested that it might be willing to make donations to help fund the work in return for the Commissioners support and permission for their line. The Commissioners took up the idea with enthusiasm, and promptly entered into similar negotiations with the LSWR.

The talks between the Crown Commissioners and the two railway companies dragged on for months and were complicated, as ever, by Eton College as well as by the views of various men of note in Parliament. Eventually the Commissioners managed to get the then enormous sum of £85,000 from the two companies. In return, the Commissioners agreed to allow through what was, in effect, a variation on the plans of the atmospheric railway route. The GWR was to build a branch on the revised route from Slough to Windsor, the LSWR would follow the route from Windsor to Staines.

from "Lost Railways of Berkshire" by Rupert Matthews 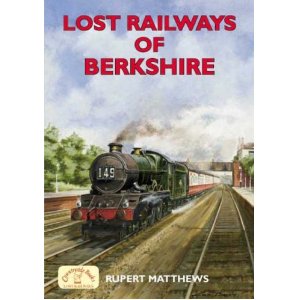