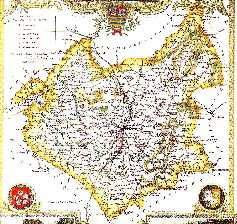 Most of Leicestershire is built on clay. The ground rises, swells and falls in a series of rolling hills that stretch to the horizon dotted by trees, topped by church spires and everywhere clothed in lush vegetation. The low lying, wetter grounds make for magnificent summer grazing for the cattle and sheep that form the basis for so many of the meat dishes of the county. Areas where the clay soil is better drained produce heavy crops of grain, potatoes and fruits or vegetables of all kinds. Mixed arable and livestock farming is typical of the county, producing a range of ingredients that has gone to produce some classic dishes.

The keeping of pigs has long been characteristic of eastern Leicestershire where root vegetables and whey, a by product of the dairy, have long provided an ideal food source for pigs. The uses to which pork has been put by the good people of Leicestershire has been hailed as their greatest contribution to English cuisine. It is not only Melton Mowbray pork pies that have benefited from the large number of hogs kept in the area.

The rolling clay east of the county is divided from the more rugged west by the defining waterway of the county: the Soar. This river flows north through a broad, fertile valley until it empties into the Trent on the county's northern border near Nottingham. Most of the county drains into the Soar by way of streams such as the Rothley, Blackbrook, Fishpool and Wreak. These streams and rivers answer the one culinary demand that a land-locked county like Leicestershire might otherwise lack: fish. Without a coast there are no sea fish here, but the rivers and lakes of the county have traditionally been rich fishing grounds for a range of freshwater fish that have between them offered up some tasty and very tempting treats.

To the west of the Soar, the landscape is more broken than to the east and the clay soil less prevalent. In medieval times Charnwood Forest was a deep and near impenetrable woodland covering some 60 square miles. It was characterised by craggy bluffs and tumbled boulders. These days much of the woodland has been cleared and the land improved for pasture. The trees still cling to the heights of Birch Hill, Cliffe Hill, Beacon and Bardon all of which offer magnificent views over the county - even as far as Belvoir Castle on a clear day. It was on the cleared land that the Leicester sheep was developed, adding its own distinctive edge to the cuisine of the county.