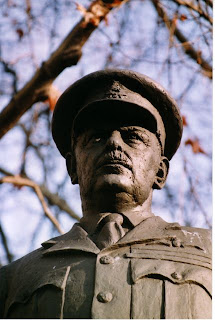 When Air Marshal Arthur Harris took up his command as head of Bomber Command on 22 February 1942 he found an urgent order lying on his desk in High Wycombe. Dated one week earlier, the directive came from Air Marshal Portal, head of the Air Staff in London. At first sight it appeared self-contradictory.

The order began by repeating the already established policy of “area bombing”, naming four cities – Essen, Duisburg, Dusseldorf and Cologne – as the prime targets with fourteen others as secondary targets. the bombing of these cites was, Harris was told, his “primary objective”. However the instructions went on to accord “top priority” to eight specific targets, made up of four power stations, three oil plants and one rubber factory.

The key to Portal’s thinking in formulating this order was the development of a new, top secret navigational aid codenamed “Gee”. In 1940 the task of solving the chronic problems of navigating bombers at night over enemy territory had been given to Robert Dippy of the Telecommunications Research Establishment (TRE). After a year’s work, Dippy produced the answer. He developed a “Gee Box” that could be carried in a bomber and operated by a navigator after only minimal training.

The box received radio pulses sent out at regular intervals by three powerful transmitters in England, each 100 miles from the other. The pulses were sent out at precisely the same instant by the transmitters, but would arrive fractons of a second apart at the receiving box. A simple triangulation carried out on the signals would give the navigator his position. Dippy estimated the equipment accurate to just 100 yards at a range of 350 miles. He also estimated that it would take the Germans about six months to produce effective countermeasures from the time they first captured an intact “Gee Box” from a downed bomber. Crews were given strict instructions to destroy the “Gee Box” if they were forced to land in enemy territory, but even so it would be only a matter of time before the Germans got hold of one.