The Strange Behaviour of the Spartans at the Olympic Games 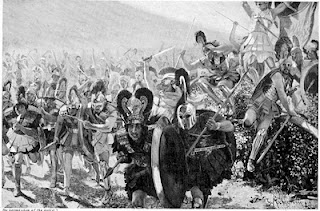 The Spartans were the most feared warriors in the ancient world. They routinely outfought armies three times the size of their own. And they did so with a steady courage and discipline that amazed all who saw them. When it came to fighting, every body wanted to have the Spartans on their side.

But it must be said that the Spartans were a strange people.

Their contemporaries in ancient Greece recognised that they were particularly peculiar. Writers went out of their way to comment on Spartan customs, Spartan dress, Spartan food and how odd it all was. For a start, the Spartans gave their girls an education every bit as good as that they gave their boys. And, for an ancient Greek, you don’t get much odder than that!

An event at the Olympic Games some years after the Persian invasion shows quite clearly an attitude among other Greeks to the Spartans. An old man was trying to find a place to sit down, limping and stumbling as he did so. He walked haltingly along the front of the grassy banks where the spectators sat, looking for a spare patch of ground, but there was none and nobody was prepared to give up his seat. Then the old man reached the section reserved for Spartiates. At once, every single man stood up to offer the old man his place. The rest of the audience broke out into applause for the Spartiate’s behaviour. The old man looked around and called out. “I see what this means. All Greeks know what is right – but only the Spartiates do it.”

To understand Sparta and the Spartans, it is necessary to understand that theirs was a society geared for war. The state had been born in war, formed by war and existed solely for war. And the entire society was dedicated to winning wars.