England's land defences against the Spanish Armada in 1588 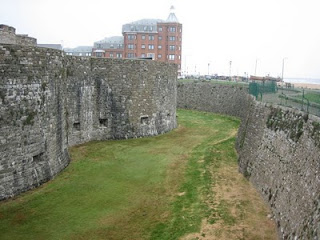 Those at sea knew that the Armada had been beaten by the morning of 9 August. Those on shore knew nothing of the kind. The last they had known for certain was that the Armada had fled east to escape the fireships on the night of 8 August. Next morning the English fleet had set off in pursuit. Since then there had been nothing but stray sightings and occasional reports.

In England the defences remained on full alert. Queen Elizabeth did not have much in the way of an army as we would understand it, but that does not mean that the kingdom was defenceless - far from it. In addition to the handful of regiments under royal control, Elizabeth also had a number of fortresses and strongpoints in her ownership and garrisoned by her men.

Some of these fortresses were rather old and obsolete, such as the Tower of London and Windsor Castle. Others were of the very latest design and equipped with the most modern of weapons. Berwick was probably the greatest of these modern strongholds, but smaller forts were scattered along the coasts.

While the older castles and fortified towns were of limited use in warfare, they did provide vital support services. Troops could be stationed there in comfort, and administrative staff had their headquarters offices there. Their prime purpose, however, was as arsenals. Huge quantities of swords, halberds, pikes, bills, shields, helmets and guns were stored in these castles ready for when they might be used. They also contained great chests of coin to pay for supplies, men and munitions when war came.

The newer forts were expected to withstand the most determined attacks made by the most modern of armies. These fortresses were very different from the old castles with their towering walls and turrets. The new style of fortification had been developed in the early 16th century as siege guns became more effective and easier to drag about the countryside on campaign. In effect, the anti-cannon defences were sunk down into the ground rather than standing up above it.