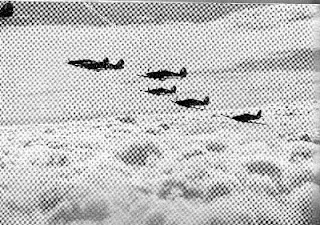 As the smoke cleared from Dunkirk and the panzers were surging across France an American newspaper reporter was interviewing Air Vice Marshal Charles Blount who had been commanding the RAF squadrons sent to France. He was now back in London and was being used by the British Ministry of Information to give the British side of recent events.

As the interview closed the American asked “What’s going to happen when the French are beaten and the Germans can turn their whole air force on to this country?”

Blount thought for a moment then said “They’re going to get the shock of their lives”.

During the fighting over France the pilots of Fighter Command had been growing increasingly unhappy with their standard tactics, particularly when contrasted with those of the Luftwaffe. Although the British pilots had achieved much, there was no doubt that control of the air over France lay with the Germans. One feature all British pilots noticed was that the Germans would not press an attack home unless they had a clear advantage, preferring to break off if the British gained the upper hand. But there was more to it than this combat caution.

Fighter Command tactics had developed during the 1930s as modern variants of the World War I tactics, but updated for the new faster fighters and larger, better-armed bombers. The basis of all RAF fighter tactics was the squadron of 12 aircraft. This was divided into two flights of six aircraft, each able to operate independently. Each flight was further divided into two sections of three aircraft, though this was for tactical sake and the sections were not expected to operate independently. It was set down that the sections would be in the “Vic” formation with the aircraft in the centre ahead of the other two.

There were three basic types of attack authorised by Fighter Command. The No.1 Attack was for use by a flight or squadron against a lone enemy bomber. The fighters would form up in line astern behind and below the enemy. The squadron leader attacked first, closing to 400 yards, firing a short burst and then peeling away to allow the next fighter to attack in similar fashion. The first fighter would then turn away and return to the rear of the line astern.

The No.2 Attack was for use by a flight attacking a formation of bombers. The flight would approach the enemy from the rear and the two sections would separate when about 800 yards from the enemy. Each section would then swerve outward to approach the enemy from a rear flank. After closing to 400 ayrds and firing a burst, the sections would peel outward, then return to repeat the manoeuvre.

The No.3 Attack envisaged a flight approaching a large formation of bombers from the rear with the two sections in line abreast. Again the fighters were to close, fire and peel away.

The No.4 Attack envisaged that a squadron of turret fighters would fly alongside the enemy bomber formation and fire at them from the beam. This would break up the bomber formations, allowing the single-seat fighters to dart in and pick off the stragglers one at a time.

It should be noted that the optimum firing range was set at 400 yards since it was thought that this provided a sensible balance between the accuracy of the guns and the ability of a pilot to react at the combat speeds of a Hurricane fighter. Ten machine guns in the wings of all RAF fighters were angled so that the streams of bullets they fired would meet at a single point 400 yards in front of the aircraft.

The tactics worked well enough in peacetime practice combats, but they did rely on two very big assumptions. The first was that the enemy bombers would behave as the RAF trained its own bomber squadrons to behave. This was to fly straight and level in a tight formation so that the defensive guns of each aircraft could cover the next. The second assumption was that there would be no escorting fighters. Given the distance from Germany to England this latter was a reasonable premise, but as the fighting over Dunkirk showed, the German fighters were actually based at mobile airfields close to the front line and very few Luftwaffe bomber formations went into battle without a fighter escort.

This is an extract from Heroes of RAF Fighter Command in Kent by Rupert Matthews.

Posted by Rupert Matthews at 03:48