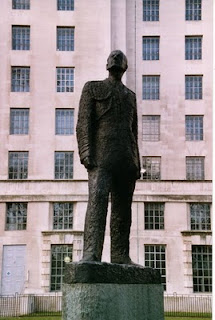 The collapse of France and the Battle of Britain that followed brought profound changes to Bomber Command in Lincolnshire. As ever, the men serving in the county were ready for the challenge and proved able to meet it.

First to be affected was the popular commander of 5 Group, Arthur Harris. His efficiency and hard work had been noticed by Charles Portal, head of Bomber Command. When Portal was promoted to Chief of the Air Staff he asked Harris to join him as his deputy with special responsibility for supervising the design and production of bombers. Harris left Lincolnshire with a heavy heart, but kept in contact with many of his men and watched their progress with interest. It was noticeable that in later years, whenever Harris needed a man for a difficult assignment, he turned first to men who had served under him in Lincolnshire.

Harris stayed at the Air Ministry for only a few months before going to America to advise the aircraft industry there on the demands of modern air warfare. His time in London was significant for one incident more than any other. One night in December, Portal summoned Harris and other officers to the rooftop walk of Air Ministry in Westminster. The City of London and the East End were being pounded by hundreds of Luftwaffe bombers dropping high explosives and incendiaries. The ancient churches and modern office buildings went up in flames as London’s firemen struggled to control the all enveloping conflagration. The sky was red with flames towering hundreds of feet into the air.

Portal noticed that Harris alone was silent, glaring at the terrible sight laid out in front of the assembled senior officers.

“What do you think?” asked Portal.

Harris kept his eyes fixed on the burning city as he answered. “They are sowing the wind,” he said evenly. Harris left unsaid the rest of the Biblical quotation from the Book of Hosea, an Old Testament Prophet: “For they have sown the wind, and they shall reap the whirlwind.”

Today a fine statue of Portal stands outside the Ministry of Defence in London. It shows him as so many of his close colleagues remember him, with his head lifted to stare at the skies to the southeast – the direction from which the German bombers came during the Blitz.