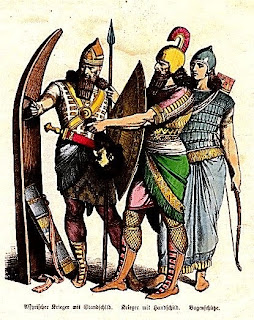 Early Egyptians used hair for armour. Some ancient Egyptians grew their hair very long in dense plaits, then wrapped these around their heads when going into battle. Their hair looked a bit like modern dreadlocks.

Only Egyptian royal guardsmen had axes. Soldiers who served in the bodyguard of the Egyptian Pharaoh, or king, carried special axes. These weapons were made of bronze and each had a heavy round weight that meant they could deliver a heavier blow in battle.

Assyrians wore long cloaks of mail. Some soldiers in the Assyrian army of about 900bc did not use shields. Instead they were covered in mail, a series of interlocking metal rings that can withstand blows from swords or spears.

Babylonians had brightly coloured armour. The city of Babylon, in modern Iraq, was famous for its wealth and power. Babylonians wore armour that they often painted with bright colours to make themselves look more impressive in battle.

True or False?
1. All Egyptian soldiers carried the same sorts of weapon.
2. Only helmets are used to protect the head.
3. Some Assyrians soldiers did not carry shields.

1. FALSE. Royal guard carried axes, other soldiers had spears or swords.
2. FALSE. Some Egyptians used their hair.
3. TRUE. Some wore long coats of mail instead.