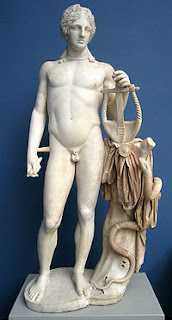 Mycenaean Greeks (see page 10) produced very few sculptures. The entrance gate to Mycenae itself is topped by two carved lions, but otherwise the earliest Greeks preferred abstract designs.
In about 650bc Greeks living and working in Egypt began to produce stone statues of people. The idea spread quickly and by 600bc stone statues were being produced in most Greek cities.

The most common type of statue was the kouros, a naked man usually shown walking slowly with stiff arms and legs. The head always faced directly forward, as in Egyptian statues.

Less numerous were the koure, a female statue. These statues were shown wearing long dresses and were usually used in temples.

These kouros figures were used in temples and on graves to represent gods and men, but no attempt was made to show individual faces. Even when they marked the tomb of a famous man, a kouros showed an ideal human.

The kouros and koure belong to the style of sculpture called the archaic. These statues were designed to be seen from the front and often stood in niches or alcoves.

In around 520bc the rigid kouros began to change. Sculptors began to show men resting on one foot or glancing to one side.

At the same time sculptors began to produce sculptures and reliefs to fit into the triangular spaces on the gable ends, or pediments, of temples. These showed men, animals and monsters in different poses so that they would fit into the space available.

By around 500bc sculptors began working bronze. These statues stood in similar poses to contemporary stone statues Very few bronze statues have survived as most were later melted down.


FASCINATING FACT
In 485bc Athens commissioned a group of bronze statues to be set up at Delphi to celebrate the Battle of Marathon. The ship carrying them sank and the statues were recovered in 1972.