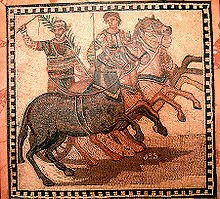 Most Romans worked hard for a living. Even the rich had little leisure time as they were expected to take part in government and to serve in the army. However, there were several days each year when people took time off work.

On their days off, Romans might watch chariot races (see page 70), go to a gladiatorial contest (see page 68) or go to the public baths (see page 156). Some days off work were religious festivals (see page 202).

Most Romans had a few hours of leisure time each week, and even days off which were not taken up by the most formal holiday activities. They spent this time alone or with friends.

A popular pastime among Romans who lived in or near the country was fishing. Men would sit on the riverbank with a net on the end of a pole or with a fishhook attached to a string dangling from a rod.

Younger Roman men liked to keep fit in case they had to serve in the army. Most towns had an open field called a palaestra where men could practise running, jumping, throwing weights or wrestling.

There were many libraries throughout the empire. Some were set up by the state, others by rich men. Anyone could enter a library to read a book, but the books could not be borrowed.

Gambling was popular with games based on dice or marked counters being played most often. Some Roans lost all their possessions at gambling matches.

Entertaining friends to dinner, or cena, was a popular activity. The Romans thought that nine people was ideal for a dinner party. Richer people might hire entertainers such as dancers or musicians.

When poorer people wanted to entertain friends they would often invite them to a tavern where they could buy food and drink for their friends.

Children had a wide variety of toys to play with. Dolls and model soldiers were popular toys, as were balls and hoops. Poor children had toys of wood, but richer families bought toys made of ivory or metal.