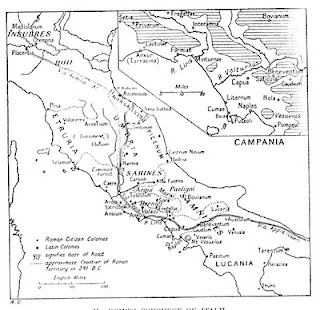 After the humiliating defeat of the Caudine Forks in 321bc, Rome remained at peace with the Samnites. But the people of Rome were eager for revenge and, in 316, saw an opportunity when several cities in Apulia rebelled against the Samnites.

The Romans sent one army to Apulia to aid the rebels while a second force marched south towards the Greek cities of Campania in the hope that they too would rebel. These Greeks, however, preferred to be ruled by the Samnites who they knew interfered little in their laws and customs. They kept the  Roman army in bottled up while a striking force of Samnites headed north into Latium. The speed of the Samnite advance took the Romans completely by surprise and a force sent out to hold the road north was wiped out. The Senate sent orders that the Latin army guarding the Liris Valley should fall back to face this Samnite army, but this merely made matters worse as a new Samnite army was able to march across the Liris and head north to join up with their comrades.

The Samnites were just 20 miles from Rome when they learned that a large Greek fleet carrying an army from Sparta had arrived in Taranto. Fearing the army was about to invade their homeland, the Samnites turned back and hurried south, only to find the Greeks had sailed on to Sicily. Two years later several Etruscan cities joined the Samnite cause and declared war on Rome. Rome managed to disrupt communications between the Samnites and the Etruscans to such an extent that co-operation between the two was impossible. The Etruscan armies were defeated piecemeal and their cities captured. The war returned to the desultory skirmishing and futile manoeuvres of the first years of conflict. In 304bc, both sides having failed in their objectives, peace was made between the Romans and the Samnites.
Posted by Rupert Matthews at 07:11