Why is the Saville Row suit so good? 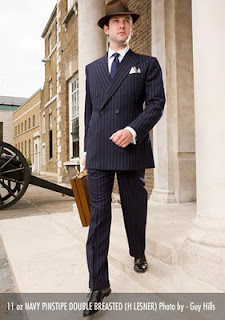 Tucked away behind Regent Street is a short street which has become synonymous with good tailoring: Savile Row. But what exactly is it about this street that makes its products so exclusive?


So firmly associated is Savile Row with the history of quality tailoring that the Japanese word for a three piece business suit is a “sabiro”, an eastern corruption of the street’s name. Yet when the street was first built it was not intended to be for tradesmen, no matter how refined and expert.

Savile Row was laid out in the early 18th century by the 3rd Earl of Burlington whose London home, Burlington House in Picadilly, is now home to the Royal Academy. He named the street in honour of his wife, one of the Savile family who held the titles of Earl of Scarborough. The nearby streets the Earl named after his various other titles - Boyle, Clifford and Cork. As with those streets, Savile Row was built a street of fine town houses for the gentry to have as their London homes.

Among those who lived in the street during this period was the politician and playwright Richard Brinsley Sheridan. Perhaps appropriately, given the street’s name, Sheridan’s first big production at Drury Lane theatre was “A Trip to Scarborough”, performed in 1777. Sheridan lived at No.14 Savile Row, where a blue plaque commemorates his tenure, but he managed to die of a sudden attack of brain fever at No.17 in 1816.

It was not long after the death of Sheridan that the fashionable families began to move their London residences to newer houses further west. The old houses in Savile Row then began to fill with tradesmen of the better sort, with tailors early establishing a dominance. The first tailor to rent in the Row was Henry Poole who moved in around 1850 and whose company still remains at No.15. By 1900 the street had become the home to the very best tailors in London. The fitting rooms on the ground floor took over the pubic reception rooms of the old houses, while the servants quarters and bedrooms were given over to workshops for the craftsmen of the tailoring business.

At the heart of a good Savile Row suit is the cutting of the cloth. Once the customer has been measured minutely by the senior cutter of the company and the fabric for the suit carefully chosen, the measurements are transferred to a master pattern. This gives the shape for each panel of fabric to be used in the suit, allowing plenty of extra cloth. At the first fitting the roughly stitched together panels are marked for more careful shaping, though still with plenty of overlap material. The second fitting sees the fabric marked most carefully for the final stitching. At the third fitting, therefore, the suit should be perfect and only slight changes are made, if any.

In recent years, however, the increasingly high cost of renting the premises in the Row have caused a change to emerge in its character. The craftsmen who lovingly fashion each garment to order from the finest fabrics are finding it difficult to justify paying such high rents. Some tailors have amalgamated to keep costs down and others have moved their craftsmen elsewhere and keep only the shopfront in expensive Savile Row.

Also creeping into the Row in increasing numbers are gentlemen’s fashion shops which do not handle bespoke tailoring at all. Indeed they sell off-the-peg suits and clothing of a quality rather lower than that usually associated with the Row. To try to contain the situation the older established tailors have formed a society known as the Companions of Savile Row. Although most of these ‘Companions’ are in Savile Row itself, a few are in nearby St George Street or Piccadilly Arcade. The link between them all is that they meet their own rigorously enforced standards of tailoring and style. If life in the Row is becoming difficult for some tailors, others are determined that the name Savile Row should continue to reflect the very finest in tailoring.
Posted by Rupert Matthews at 23:05