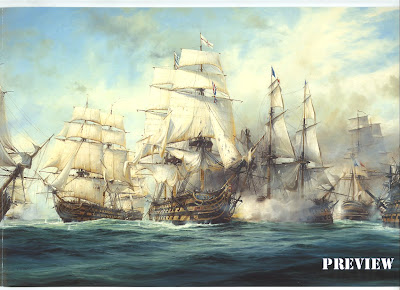 After 1800 the war at sea was primarily a struggle for supremacy fought between Britain and France. The climactic Battle of Trafalgar in 1805 gave Britain the upper hand, but the war continued as a series of raids, skirmishes and convoy battles as both sides sought allies to help them control the trade routes.   By 1800 Britain had reason to believe that she had achieved a mastery of the seas. In 1797 the Spanish fleet had been badly mauled at the Battle of Cape St Vincent by a British fleet under Admiral Sir John Jervis and Horatio Nelson. Later that year, on 11 October Admiral Adam Duncan had intercepted the main Dutch fleet en route to invade Ireland. Of 11 Dutch ships of the line, nine were captured or sunk. The following year, the French Mediterranean fleet  of 13 ships of the line and 4 frigates escorted a military convoy carrying the French invasion force to Egypt. Admiral Nelson with his 13 ships of the line missed intercepting the convoy, but caught up with the French naval ships in Aboukir Bay near the mouth of the Nile on 1 August. Nelson did not wait to form a plan of battle, but trusted his captains to know his intentions and gave the signal to attack. Four British ships slipped inshore of the anchored French ships while the others attacked from seaward. Caught between two fires, the French fought gallantly but were outgunned. The battle raged late into the night, with the French flagship blowing up when flames reached her magazine. In all two French ships were sunk and nine captured.

Although these actions had knocked out two French allies and destroyed the French Mediterranean fleet, Brtiain was not yet supreme. On paper the French fleet was still impressive and could be a match for the British. However, in reality the French fleet suffered some significant disadvantages. The most important of these was that the dictator, soon to be Emperor of France, Napoleon Bonaparte was a soldier who neither understood the potential of naval warfare to hurt Britain nor was willing to give the French navy the money and men it needed to fight effectively. As a result the French warships spent most of their time in port where their upkeep was cheapest, but where their officers and men failed to get sea or combat experience.

The naval war took a sudden turn in 1801 when Russia formed an armed coalition with the Baltic powers which until this date had been neutral. Since Russia was, at this date, friendly to France, Britain was determined to break up the alliance. A fleet commanded by Sir Hyde Parker with Horatio Nelson as his second in command was sent to the Baltic. On 2 April the British fleet sailed into Copenhagen Harbour and opened fire. At one point the British appeared to be losing and Admiral Parker ordered his ships to retire. Nelson put the telescope to his blind eye and declared that he could not see the signal, and fought on. By dusk, the entire Danish-Norwegian fleet had been destroyed.

In 1805 Napoleon decided to invade Britain. He gathered a vast army at Boulogne, but the unarmed barges that he prepared to transport his men over the Channel would have been helpless victims under the guns of the British Channel Fleet. He therefore ordered Admiral Pierre de Villeneuve to destroy the British fleet. Villeneuve’s plan was to get the assorted French squadrons out of Toulon, Ferrol, Brest and Rochefort and rendezvous them with the Spanish fleet in the West Indies before sailing for the Channel in overwhelming numbers.

Nelson had discussed an attack plan with his captains beforehand so, as at the Nile, he attacked without delay. The British fleet formed into two columns to break through the enemy line of battle and produce a disorganized battle in which the British heavy firepower would have an advantage over the Franco-Spanish manoeuvres.

The battle began a little before noon and raged until 4.30pm. By that time 20 French and Spanish ships had been captured and the rest badly damaged – only five ever saw action again. The British lost  no ships, but had 1,587 killed and wounded. Among the dead was Nelson, shot by a sniper’s bullet at the height of the action.

After Trafalgar the British control of the seas was never seriously in question, but the naval war did not end. Frigates and privateers from France and her allies continued to prey on British merchant ships, while the Royal Navy sought to protect them. Some of the most audacious privateers operated out of Calais and Boulogne, capturing merchant ships within sight of the British coast.

The Royal Navy also instituted a blockade of France and her allies stopping all goods that might be of use to the French war effort. This practice of searching neutral merchant ships led to disputes and in 1812 war broke out between Britain and the USA. The Royal Navy diverted over 80 ships to blockade the US Atlantic coast. There were no large naval actions during the war, but some significant single ship actions did take place. Perhaps the most significant of these was the victory of the USS Constitution of 44 guns over the 48 gun HMS Guerriere on 19 August 1812. The Constitution later captured a second British frigate, winning for herself the nickname of ‘Old Ironsides’.