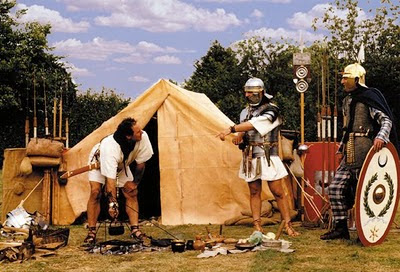 A legion on campaign was in constant danger of attack. The cover of night would give an enterprising enemy the chance to launch a hit and run raid, perhaps to destroy supplies or chase off horses and mules. It was to guard against such action that the Roman army developed the habit of pitching a fortified camp every evening when on the march.

The first men to arrive at the night's campsite were the engineers who laid out the basic structure of the camp. They used poles planted in the ground to mark the line of the palisade, the position of the gates, the places for the officers’ tents, the legionary tents, the horse lines and other structures. Next came the one man from each group of eight whose task was to pitch a tent and start a cooking fire for his colleagues. The others were put to work on erecting the officers’ tents, digging latrines and, most important of all, erecting the defensive palisade.

Each legionary carried with him a pick, shovel and two wooden stakes, the essential equipment for constructing a marching camp. Following the lines laid out by the engineers, the legionaries began by stripping off the turf and putting it to one side. They then dug a ditch and piled the earth up on the inside of the ditch until the height from the bottom of the ditch to the top of the bank was taller than a man could reach with upraised arms. The bottom of the ditch was carefully constructed with a  special square-headed spade. This produced a square-bottomed trench with vertical sides a few inches tall. The flat bottom was too narrow for a man’s foot to be put down flat, making it more difficult for an attacker to get a firm foothold when attempting to climb the defences.

The turf was then replaced along the sloping face of the ditch. The top of the earth bank was crowned by a continuous line of wooden stakes. The stakes had a groove half way up so that they could be lashed together to form a more secure bulwark. A flat walkway ran along the bank behind the wooden palisade. It was here that the sentries patrolled through the night and where the legionaries would mass to repel any attack.

Each gateway was closed by a wooden barricade that served as a serious obstacle in the face of attack, but which could be dragged aside to allow patrols to go out and return. Sometimes an outwork was put in front of the gateway to disrupt any frontal assault and break the momentum of a hostile force attempting to batter down the gateway.

The land in front of the defences was cleared of scrub and undergrowth for some distance so that an approaching enemy would have no cover in which to hide. It was not usual to fell large trees unless the camp was to be occupied for more than two or three nights, but in dense forest there would have been little choice other than to clear even the trees.

In open country it took about three hours to construct a marching camp, though in wooded areas it might have taken much longer. This time spent entrenching would have slowed down the legion’s rate of travel considerably. The military need for the camps must have outweighed the disadvantages of a slower advance.

Although the primary purpose of these marching camps was defensive, they had other advantages. They not only kept the enemy out of the the camp, but also kept the Roman forces inside. This stopped men wandering off to engage in freelance looting and, perhaps, having their throats slit. It also hampered attempts at desertion. Roman soldiers were highly trained and were much respected by other rulers. Several accounts of campaigning mention that kings and generals, both allied to Rome and enemies of Rome, offered generous pay to Roman soldiers who would train their own men in Roman-style fighting.

A final advantage of building the marching camps was the effect it had on enemy morale. The timber palisades and earthworks clearly demonstrated the intention and the ability of the Roman army to venture and establish itself wherever it wanted. When combined with the sight of  rank upon rank of heavily armed infantry marching in unison, the marching camps demonstrated Rome’s clear superiority in military technology over  most of her enemies. More than one ruler chose to make peace almost as soon as the legions entered his territory rather than risk a battle.
Posted by Rupert Matthews at 01:03