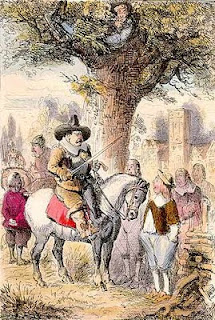 Perhaps the most famous, certainly the most romantic, incident in the life of King Charles II came when he hid in an oak tree to escape the soldiers searching for him after the Battle of Worcester. The event has been commemorated on pub signs up and down the country.


After defeat at the Battle of Worcester, Charles realised he would have to escape form England if he were to be certain of avoiding the execution given to his father. He first rode north with a close friend, Lord Wilmot, passing through Kidderminster to get away from the pursuit after the battle. Charles then rode to Boscobel House, an out of the way  manor house owned by the staunchly Royalist Penderel family.

Charles hoped to find sanctuary there while he organised an escape route. The Penderels, although happy to risk their lives for the young king, were painfully aware that their known Royalist sympathies would mean they could expect their property to be searched before long. They sent Colonel Wilmot off to try to organise a route out of the country, while the king and another fugitive officer, Colonel William Carlis, were put in hiding.

There was no hiding place in Boscobel House which could not be found so the two men were loaded with bread, cheese and beer and led out into a nearby patch of woodland. The Penderels were farming gentry and knew the lands around their home intimately. William Penderel took the two men to a tall oak tree which had been lopped some years earlier and now had a crown of branches and leaves that were all but impenetrable. Scrambling up a ladder the king and Carlis  pushed through the crown to find themselves in the open heart of the tree where it had been cut. There they settled down and the king began to doze.

Soon after noon the soldiers from Cromwell’s army arrived. Troopers moved through the wood diligently probing the thicker bushes with their swords and peering into the tree branches. Even though one soldier looked directly into the oak, he did not notice the fugitives and the search moved on.

With danger seemingly over, the king fell asleep again while Carlis kept watch. Suddenly a new force of soldiers appeared and began a fresh search of the woods. To his horror, Carlis noticed that as he had slept, the king had shifted position and would almost certainly be seen from below. Carlis tried whispering, but soon realised that if he spoke loud enough to wake the king he would be heard by the troopers now almost beneath him. The desperate Carlis leant across and pinched the king hard on the arm. Fortunately the king awoke silently and was able to pull himself back into cover.

The king had many more adventures ahead of him as he travelled secretly through England, trying to get aboard ship in Bristol, Bridport and Charmouth before eventually finding passage to France on board the tiny coal brig, the Surprise, sailing out of Shoreham. When he eventually regained his throne, Charles remembered those who had aided his escape and rewarded them well. The Penderels, for instance, were given a large sum of money invested in a trust which would pay to them and their heirs for ever enough money to ensure a reasonable standard of living. It is still paying out to the Penderels to this day.