The RAF Comes to Norfolk

The RAF Comes to Norfolk

Norfolk was to become one of the most important counties to Bomber Command during World War II, but it had not always been so. Indeed, at first Norfolk had barely registered with the RAF at all.

In 1919 the British government adopted a stance known as ‘the Ten Year Rule’, to which it still largely adheres. Put simply, this restricted the Ministry of War – Defence as it is now – to preparing only for conflicts that the Foreign Office thought possible within the next ten years. In 1919 the Great War was barely over. Nobody thought another major European war likely. As a consequence the RAF was instructed to prepare only for minor wars fought far from home in the further reaches of the Empire.

The RAF was fortunate at this time to have as its commander Sir Hugh Trenchard. Trenchard had fought through the Great War and was a firm believer in air power as a war-winning weapon. Trenchard’s room for action was severely limited by the Ten Year Rule, which effectively halted the production of modern war aircraft. However, he put his formidable organisational talents to work on the manpower of the RAF. He established the RAF as a professional core on to which a later expansion could be built. What money could be spared for new technology went on developing fast bombers. By the time Trenchard left the RAF in 1929 the shape of the future force was clear, if masked by antiquated biplanes.

It was in 1933 that the Ten Year Rule first allowed for the possibility of a major European war, with Germany as the most likely enemy. It was at this point that the RAF came to Norfolk. Marham and Feltwell were designated as bomber stations and construction work began.

from RAF Heroes of Bomber Command in Norfolk, by Rupert Matthews. 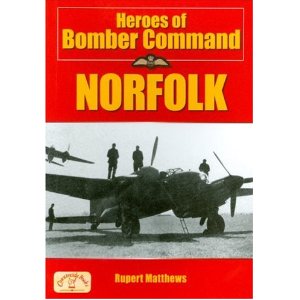