It was unfortunate for the crews of Bomber Command based in Lincolnshire, and elsewhere, that the rapid expansion of the force in the county from 1936 onwards was based on a number of assumptions that turned out to be completely mistaken.

The first was that Britain would have France as an ally in any war against Germany. When the “Phoney War” ended in May 1940 France collapsed so suddenly and completely that her air force was of no practical use to anybody except the Germans who appropriated French aircraft and airfields for their own use. Unexpectedly the RAF had to face the Luftwaffe alone and unaided. The numbers of operational bomber squadrons were quite inadequate for the task they were abruptly handed.

A second assumption wiped out just as effectively by the French surrender concerned the performance of the aircraft. Strategists of the 1930s envisaged a repeat performance of the Great War. It was assumed that most of Bomber Command would be based at airfields in France and would be used to attack targets only a short distance beyond the front line. Even those aircraft designed to penetrate deep into Germany had a limited range. When France fell, the bomber crews found themselves faced with flying the long haul from Lincolnshire to Germany. Most aircraft simply did not have the range.

Finally there was the fatal assumption that “the bomber will always get through”. It was thought that the modern bombers of the later 1930s could fly fast enough to evade most enemy fighters, and had enough defensive armament to beat off attacks by those that did manage to intercept the raids. This fallacy would be cruelly dispelled by the early combats with the superb German fighters.

from "Heroes of the RAF in Lincolnshire" by Rupert Matthews.
Get your copy HERE 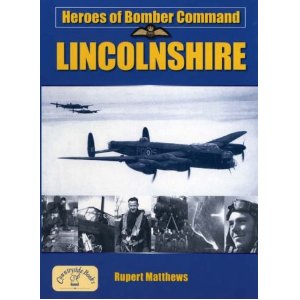