On 28 March 1942 RAF Kenley in Surrey suffered its first casualty at the guns of the FW190, and it was a profound loss. Group Captain Victor Beamish DFC, was one of the most popular officers on the base and had just been promoted to have overall command of the Kenley Sector. Although his position and age, he was 39, meant that he did not need to fly into combat, he chose to do so in order to boost morale among his men and to keep up his understanding of combat conditions. He was on a Rodeo with No.485 Squadron when the force was bounced by a cloud of FW190 fighters. Beamish’s Spitfire went down into the Channel. Although the entire Wing took off to try to find him in his dinghy he was never sighted.

The entire Wing was plunged into gloom by the loss. “Here, indeed, was a man” recorded the official Station Record Book.

A few weeks later, on 29 April, King George VI paid an unannounced and unexpected call on Kenley to watch at first hand a Circus operation take place. He arrived soon after the Wing had taken off, and watched the operation unfold on the map at the Operations Room in The Grange, while listening to the radio chatter between the pilots. When the Wing returned, fortunately without loss, the king insisted on being introduced to every single pilot, even waiting while those who had landed at Redhill were brought over by bus. Morale was restored, but Beamish was not forgotten.

His place was taken by Group Captain David Atcherly DFC, who had three enemy aircraft to his credit and was a highly experienced nightfighter. He was not familiar with the Spitfire so he decided to take one up to practice on and was promptly shot down into the Channel by an FW190. He escaped with only scratches and was back in his office later that day.

from "Heroes of the RAF Fighter Command in Surrey" by Rupert Matthews.
Get your copy HERE 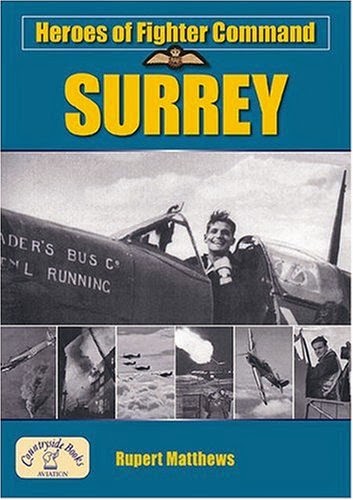