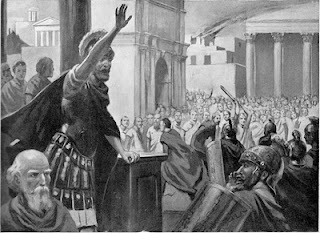 The Roman mob could oust emperors
Over a million people lived in ancient Rome. Many of them were voting citizens who did not have a regular job. Even the most powerful emperors had to keep this vast mob of Romans happy. If the mob rioted, the emperor might be killed and replaced with somebody the citizens preferred.


Each seat was allocated to a particular person
People attending the gladiator games had their own seats. The row and seat numbers were written on small clay tablets which were handed out by the editor of the games. Some seats were given to whoever queued up outside the arena.


Women had to sit at the back
The seats with good views were reserved for the men who had votes and money to help the editor. Women in ancient Rome could not vote, so they were given seats right at the back of the crowd.


The mob tried to decide which gladiators lived, and which died
If one gladiator was wounded, he could appeal for mercy. The man held up the first finger of his left hand. The editor then decided whether or not to grant a missus, allowing the man to leave alive. The mob would give a thumbs down gesture if they thought the man should die, or hide their thumbs in a clenched fist if they thought he had fought well enough to live. The editor usually did what the mob wanted so as to gain favour.