The Nimitz Class of aircraft carrier 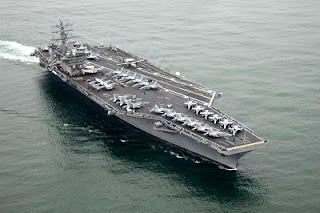 The place of the Forrestal class supercarriers was taken by the ten ships of the Nimitz class. These began entering service in 1975 when the USS Nimitz herself was commissioned. The most recent to enter service was the USS George H.W. Bush in January 2009. These ships are even larger than the Forrestal class. They displace about 101,000 tons, are 1,092 feet long, 252 feet wide and draw 37 feet. Their nuclear engines provide effectively unlimited endurance, though they ships need to restock with food and other supplies from time to time, and can achieve speeds in excess of 30 knots. For defensive purposes they have up to 40 anti-aircraft missiles.
Each ship of the Nimitz class can accommodate up to 90 fixed wing aircraft or helicopters, or a mix of the two. Among the fixed wing aircraft flown from the ships are the F/A-18 Super Hornet multirole fighter and the EA6B Prowler electronic weapons aircraft. Each carrier forms the heart of a carrier strike force, which consists of a number of warships including cruisers and destroyers. These provide anti-aircraft protection in depth, act as launch pads for cruise missiles and are able to lay down gunfire in support of amphibious landings. Two cruisers and five destroyers, for instance, escort the USS Nimitz.
From THE WORLD ATLAS OF WEAPONRY by Rupert Matthews
Posted by Rupert Matthews at 01:26