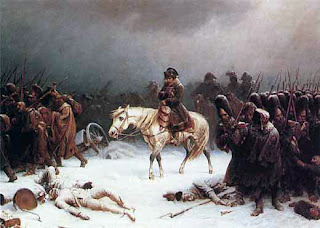 After making peace in 1807, Russia’s Tsar Alexander had been growing increasingly fearful of Napoleon and his ambitions. He watched the war of 1809 and decided to reform his army along the lines pioneered by Austria. With his new army, Alexander grew increasingly restive and by 1812 Napoleon had become convinced that Russia was about to declare war.
Napoleon decided to attack Russia before Tsar Alexander could conclude an alliance with Britain and, perhaps, Austria. For the showdown with Russia Napoleon mustered an army of 600,000 men, but 400,000 of these came from allies who were serving more or less under duress and had no real desire to invade Russia. Napoleon knew this and earmarked them for garrison and patrol duty, keeping his 200,000 Frenchmen for the key task of fighting battles. He crossed the border in June.
Alexander had about 250,000 men, who he put under the command of the veteran General Kutusov. Kutusov recognized that his main task was to avoid being defeated, so he opted to withdraw deep in to Russia rather than fight a battle on the borders. He wanted to force Napoleon to leave behind troops to garrison towns and forts, thus weakening his main army. Meanwhile the long supply lines would leave the French short of food and ammunition.
Finally, on 7 September, Kutuzov calculated the French were sufficiently weakened. He stopped to fight at Borodino with 121,000 men. Napoleon could field 130,000 men. The resulting battle was a bloody stalemate that saw the French losing 30,000 men and the Russians 45,000. Realizing he had miscalculated, Kutusov retreated once more and abandoned Moscow.
Napoleon entered the Russian capital in triumph, but it was a hollow victory. He had no food and the Russians stubbornly refused to come to terms. Instead, Napoleon was forced to retreat after 5 weeks. The return march became a nightmare as food ran out and the bitter Russian winter closed in – and the Russian army harried the invaders mercilessly.
By the time Napoleon regained friendly territory his losses had been enormous. About 350,000 men had died, either in battle or due to disease, while another 100,000 had been taken prisoner. His army had ceased to exist as a major force.
From

The Historical Atlas of the World at War

Posted by Rupert Matthews at 01:28