Henley and the GWR 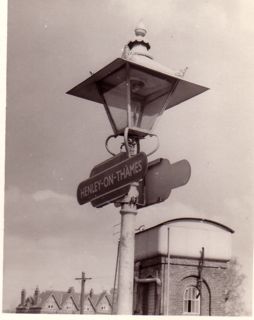 The busy, thriving town of Henley was a prosperous river port in the 1820s, so the citizens were probably relieved rather than upset to be bypassed by the new Great Western Railway.

Isambard Kingdom Brunel laid out a route for the GWR that ran direct from Maidenhead to Reading. This route meant cutting through the hill at Sonning, a major feat of engineering, but if the flat land along the river had been followed, the route would have many miles longer. Quite soon the fast, modern railway was taking traffic off the river boats. In the first year that the GWR ran, the river boats lost 23% of their trade and by 1845 long distance traffic had effectively ceased to operate on the Thames. Henley was left with only local river transport and its docks and warehouses stood empty. Moreover the town council watched with envious eyes as Reading prospered on goods brought in by rail. Factories, breweries and mills boomed in Reading, but faded in Henley.

In the spring of 1854, therefore, the Mayor of Henley led a delegation to the offices of the Great Western Railway in London. The townsfolk asked the company to open a branch line to Henley. The GWR had already surveyed a route from Twyford to Henley, but had not gone ahead with the line due to worries about its ability to turn a profit in the face of local hostility. Now that the town council and leading citizens were fully behind the plan, the financial sums were very different. Construction work began that autumn under the direction of Mr Murray, a GWR Engineer.

The route to be taken was uniformly flat and free of obstructions, except for one: the Thames. The site chosen for the crossing was just downstream of Shiplake Lock where an island provided a convenient base for the bridge piers in midstream. Mr Murray decided that the budget he had been given would not stretch to a proper bridge, so a timber viaduct was constructed to carry the railway over the river. By this date the Thames Commissioners, who organised river trade and kept the river navigable, were teetering on the edge of bankruptcy with debts of around £50,000. They were in no position to insist on keeping the river clear for large boats, so Mr Murray’s viaduct gave clearance for only smaller barges such as made up the vast majority of the local river trade.

After taking a surprisingly sharp bend as it left Twyford, the branch line ran almost directly north to cross the river, then bent slightly to the west to run into Henley. Mr Murray built just two stations on the five mile length. The first was slightly north of the river crossing at Shiplake, which consisted of little more than a platform and a lockable shed. The station at Henley was more grand, having a proper station building in the GWR style and an engine shed.

Posted by Rupert Matthews at 00:58