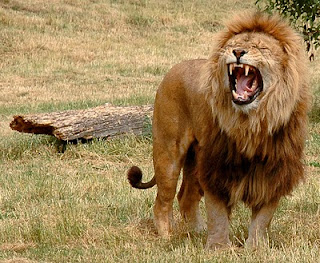 Soon every victorious general brought back to Rome a selection of animals native to the lands in which they had been fighting. Soldiers on campaign had long written home with accounts of bizarre animals, now the Romans could see the beasts for themselves. Julius Caesar brought a giraffe to Rome, and won great acclaim as no giraffe had been seen in the city before.

It was not long, however, before the generals parading animals through the Forum found they had a problem. What were they to do with the animals once they had been displayed to the crowd. Most of them were expensive to keep in captivity and a few, such as lions, were dangerous. The answer was to include the wild animals in the bloody games of the arena. Exotic animals brought from far distant lands were to be killed for the delight of the mob.

At first the animal fights were fairly straightforward affairs. The hapless beast to be killed was chained to a ring set in the pavement of the Forum and then attacked by men armed with spears and, sometimes, assisted by dogs. By the time Sulla became dictator of Rome in 82BC such a format had become stale. For his animal hunt, featuring beasts from what is now Turkey, Sulla erected tough wooden fences around an open area in the Forum. The animals were then let loose to be hunted down by packs of dogs and men with spears. When the Forum was too small for the proposed display, the event was moved to the Campus Martius, the open fields north of the city, where the Saepta, or voting enclosures, could double as animal pens.

In 79BC Gnaeus Pompey organised a fight between war elephants from North Africa and tribesmen skilled in hunting the beasts. The hunt was held in the Circus Maximus, the chariot racing course which was large and surrounded by banks of seating. Although Pompey’s spectacular almost went wrong when the maddened beasts tried to attack the crowd, elephants remained a favourite of the Roman mob.