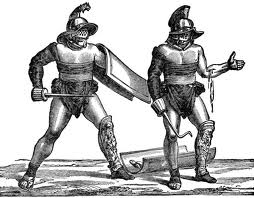 Election Fever
Only adult men who were citizens of Rome were allowed to vote in elections. These elections decided who would rule Rome for the next year. Each year a government official called the Censor drew up a list of citizens who were entitled to vote. Anyone who wanted to be on the list had to prove to the Censor either that his father had been a citizen or that he had been made a citizen by the government.

Pledging Votes
Politicians standing for election would use gladiator shows to influence voters. Only citizens who had promised to vote for the politician paying for the show were allowed to attend the show. Guards stood at the entrance to the arena to turn away people who were supporters of a rival politician.

Gaius Julius Caesar
Gaius Julius Caesar was one of the most successful politicians to use gladiatorial shows to win elections. In 65bc Caesar put on a show with 640 gladiators, some of whom wore armour made from pure silver. Caesar won his election and went on to become Dictator of Rome.

Honoured Guests
The priestesses who served in the Temple of Vesta were highly honoured in Rome. Vesta was the goddess of the fire in the home that was used for cooking and other household purposes. The best seats at any show or festival, including gladiatorial fights, were reserved for the priestesses of Vesta.

Ambitious Men
In towns and cities across the Roman Empire local citizens elected their local council and officials. Gladiator shows were put on in these places by ambitious politicians, just as in Rome. In the city of Bononia a rich man who owned a factory making shoes won an election after importing famous fighters from Rome for his show.

Clubbing Together
Paying for a gladiatorial show cost a lot of money. Sometimes two or three politicians would club together to pay for a show. These men were known as socii, meaning allies. Each of the socii could invite his own supporters to the show.

Quiz Question
Who dressed his gladiators in silver armour?