Crecy, the evening of battle begins 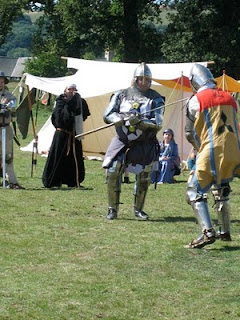 After giving his orders to his army to halt for the night, King Philip will have ordered his immediate entourage to start pitching camp and getting ready to cook dinner. It cannot have been long, however, before Philip began receiving messages telling him that all was not going to plan. The troops ahead of him on the line of march were pushing forward in confusion, while those behind were in an even greater muddle.

In fact the movements and actions of King Philip in the crucial hour or so that followed are enigmatic. Our best source for the movements of the French high command is le Bel, whose patron John of Hainault was with the king throughout most of the day. His chronicle leaves King Philip somewhere near Marcheville having given the halt order at about 4pm. Philip is not mentioned again until late in the battle when, as we shall see, he takes a prominent part.

Baker likewise barely mentions King Philip’s role in the battle itself. He says that Edward unfurled his dragon banner in response to seeing that King Philip had brought the Oriflamme with him and implies that this took place before the French attack began. Writing just days after the battle, Richard Wynkeley also reports seeing Philip’s banner before the fighting began. “The adversary” writes Wynkeley using his usual euphemism for Philip, “intending to attack the king personally stationed himself in the front line”. It should be remembered that it was impossible to recognise a man across the width of a battlefield, especially if his face were hidden by a helmet. What Wynkeley saw was Philip’s banner.

The only definite statement of Philip’s movements at this crucial time comes from Froissart who writes that when he learned of the chaos enveloping his army, Philip rode forward to try to take control of the situation but “when the French king saw the Englishmen, his mood changed. He said to his Marshals ‘Begin the battle in the name of God and St Denis’”.