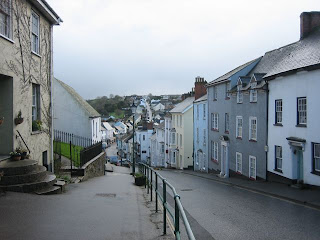 The causes of the English Civil War of the mid 17th century were complex. Some felt that political considerations were the more important, either wanting to advance the power of Parliament or to enforce the rights of the King. Others saw religion as more important with Protestants backing the radicals in Parliament and the moderates favouring the King’s support for the established Church of England. Still others were more concerned with ridding England of the inept ministers that King Charles had chosen. For many it was a mix of motives that led them to chose the side they did.

Whatever the motivations that led England into civil war, the southwest of England was generally for the king when King Charles I raised the Royal Standard in August 1642 and summoned all loyal Englishmen to join his army. A striking exception was the city and port of Plymouth, which declared for Parliament and closed its gates to the county authorities who supported the king.

At first few men took the prospect of civil war seriously. Several weeks passed without serious fighting as both sides sought to take control of armouries, fortresses and civic treasuries. Both King and Parliament thought the other would back down rather than force a conflict. It was not until after the first large scale battle at Edgehill in October that it dawned on most men that the war was to be taken seriously.

Sir Ralph Hopton, a gentleman from Somerset, was appointed the King’s commander in the Southwest. He ordered the loyal men of South Devon to muster for war at the church at Modbury on 6 December 1642. Each man was to bring with him whatever he had in the way of weapons. Hopton planned to organise the men in to regiments once they had arrived. Those with good weapons were to be fighting troops, those without to form supply units or train as siege engineers or to be used for the manual labour that all armies need.

When Hopton arrived he was pleased to find that more than 3,000 men had turned up. The task of getting them organised into an army would begin the next day. Unfortunately for Hopton the Parliamentarian garrison of Plymouth had heard of the muster and were determined to intervene.


1) In Modbury walk west up the hill and along the A379 to find the war memorial on the left near the top of the hill.

It was down this road at dawn on 7 December that a force of 500 Roundhead troopers came galloping at full speed led by Colonel Ruthin. The professional horsemen wasted little time, but at once went to work attacking the sleepy Royalists as they stumbled from their beds and tents. Hopton himself narrowly escaped a sweeping sword blade before he managed to get on horseback and try to organise a rally, but it was too late. The Roundheads swept through the town with ruthless efficiency and the forming royalist army was scattered across the fields of south Devon. This First Battle of Modbury was over quickly and few men lost their lives – neither would be true of the Second Battle of Modbury.