What is the Royal Academy? 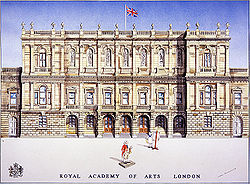 
From its very inception the Royal Academy was aiming for gentility as well as for artistic integrity. The men who set up the institution included the painters Sir Joshua Reynolds and Thomas Gainsborough as well as the architect William Chambers. They gained the support of King George III, who promised in 1768 to be the ‘patron, protector and supporter’ of the institution, which meant the title ‘Royal’ could be added to the name.

At first the Royal Academy had rooms in Somerset House, then a rambling and rather run down old mansion used for government offices and storerooms. The rooms occupied were well lit, but rather small. They were used for the lessons given by masters of art to promising pupils, among them Constable and Turner, but were too small for exhibitions. A house was therefore rented in Pall Mall and converted into an art gallery.

In 1776 the government decided to pull down Somerset House and replace it with a purpose-built block of offices, one of the first such buildings ever erected. After a period in rented rooms, the Royal Academy moved back into the new Somerset House to find a suite of rooms in which 700 paintings could be displayed to the public. In 1837 the Royal Academy moved to share the home of the National Gallery in Trafalgar Square, but in 1868 finally reached its present home in Burlington House, formerly the London home of the Earls of Burlington. The house, which dates back to the 1660s was extensively remodelled to provide 17 main galleries of display space and ample rooms of for the schools and lessons held there.

Before an artist can be accepted as a member of the Royal Academy, he or she must present a piece of work that they have chosen as representative of their art. In this way the Royal Academy has amassed an unrivalled collection of works by British artists. But for the general public it is the Summer Exhibition for which the Royal Academy is so famous. Held every year since the Royal Academy was founded, the Summer Exhibition features the best 1,000 or so works submitted to the Royal aCademy for inclusion. Currently about 10,000 works are submitted each year by some 4,000 artists. The only criteria for a work to be presented is that the artist must submit it in person and that it must not have been shown in London before.

But whether it is putting on grand exhibitions for the general public, conducting lessons in private for promising students or holding talks and seminars, the Royal Academy has long been instrumental in maintaining the reputation of British art. Perhaps because it is run by artists for artists, it has rarely lapsed into the excesses of modernity favoured by some critics but has continued to present works the public can enjoy.
Posted by Rupert Matthews at 01:14