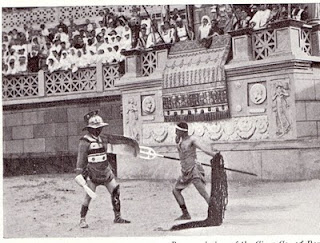 Most gladiators used only one type of armour and weapon, training with them for hours every day.

Romans could buy lamps and other souvenirs at the Games made in the shape of gladiator helmets.

Many gladiators belonged to clubs which organised entertainments and paid for funerals.

Only noblemen were allowed to wear togas with purple stripes.

Every Roman town had large, blank walls on which adverts for gladiator shows could be painted.

In ad84 a storm drenched the audience during a naumachia. Nearly everyone caught a cold, except the emperor Domitian who had a warm cloak on.

The emperor Nero once fought a lion in the arena when armed with only a single spear.

The oldest arena still standing is that in Pompeii, which was built in 80bc.

Posted by Rupert Matthews at 01:18