Arms and Armour in medieval China 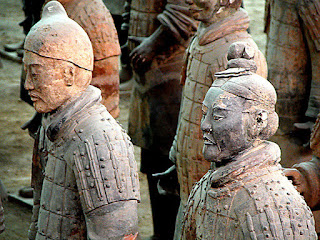 Chinese armour was made of dozens of small plates. The armour worn by Chinese troops was made up of metal plates about 8 cm by 6 cm that were sewn onto a leather garment or held together by leather thongs. In about 221bc the various states of early China were united under the rule of one emperor. Although there would be later civil wars in the Celestial Empire, or Middle Kingdom, as China called itself, the Chinese armies fought most of their wars against outsiders.

Infantry often used pole weapons. Chinese infantry usually carried spears just over 2 metres long. Often the spearhead was replaced by an axe-like chopping weapon, a slicing blade or a side spike. These pole weapons allowed the infantry to attack their enemies with a variety of actions to get around shields or even to deal with cavalry.

Crossbows were first used in China. Because they were more powerful than the bows used by nomadic tribesmen living to the north of China, the crossbow was often used by troops manning the northern frontier. Crossbows consist of a short, powerful bow mounted on a wooden shaft and operated by a trigger.

Silk shirts helped protect against arrows. Many Chinese soldiers wore a silk shirt under their armour. If an arrow pierced the armour it would drag the silk shirt into the wound without tearing it. By gently pulling on the shirt, the arrow could be extracted cleanly.

Chinese cavalry were heavily armed. When patrolling border regions, the Chinese cavalry operated in large formations that could defeat any tribal force causing trouble. The men were equipped with iron helmets and body armour, together with wooden shields and long lances tipped with iron.

Quiz
1. In what year was China first united?
2. What did Chinese soldier wear as protection against arrows?
3. Where did the nomadic tribesmen live?