The Royal Bodyguard of Alexander the Great 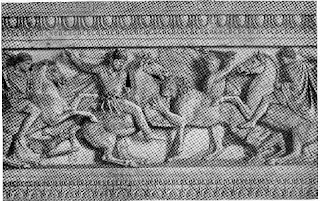 The Bodyguard were all young men drawn from the nobility of Macedonia. There were probably 200 of them when the Granicus campaign began, but their number subsequently fluctuated widely. Perhaps there was no fixed number. Alexander may have appointed men to the unit as and when he wanted to show favour to individuals or families.

This bodyguard certainly had the task of guarding the king, and it may have been divided into seven sections - one for each day of the week. Beyond that the bodyguards were used to carry messages, attend the king and his generals and undertake various ceremonial and other duties. There is some indication that the bodyguard formed a sort of unofficial training school for army officers. The men of the bodyguard would certainly have been close to the decision-making process at the highest level and under the eyes of the experienced senior officers. We know of several higher commanders who had previously served as bodyguards, but we do not know of any who had not. The bodyguards seem to have been equipped as hypaspists and, on a few occasions, are recorded as fighting alongside them in battle.

The Royal Bodyguards were in constant attendance on the king. In effect they were his war council. While the final decision in any circumstance lay with the king, he would ask for advice from his Royal Bodyguards. Indeed, the Royal Bodyguards felt that they had the right to give advice whether or not it was asked for. It is likely that the king chose these men for their technical knowledge or experience. He would seek to have one who knew about the cavalry, another who was an expert on siege warfare, a third who had visited the territory through which the army was moving and so forth. That at least is the theory. There must have always been a temptation for the king to appoint men who would agree with him rather than those who would give useful advice. Philip does not seem to have fallen into this trap, nor does Alexander - at least in his early years.

Waiting on the king and the Royal Bodyguards as servants were the royal pages. These were boys aged between about 10 and 15 who came from the noble families of Macedonia and the associated tribes that owed allegiance to the Macedonian kings. It seems that recruitment into the royal pages was obligatory rather than being either a choice or an honour.

There was probably an element of cold statecraft in this institution. Noblemen and the leaders of hill tribes were surely less likely to rebel or cause trouble if their sons were with the king. The Macedonian kings had, in the past, been ruthless with the families of those who caused them trouble. Imprisonment was the least that could be expected, execution was more likely.

On the other hand, the pages were given a sound education in philosophy, mathematics and other sciences. They were also taught all the skills needed in warfare, both on the practical fighting level and in the fields of command and organisation. They earned their keep, as it were, by working as the personal servants to the king and his high commanders. We know that they ran the king’s bath, served his food at table and - at least in the days of the womanising Philip - escorted the concubine chosen for the night to the royal bedchamber. They wore a distinctive uniform which might have included a white cloak with a red border.

When they grew too old to be royal pages, the young men would be assessed by the king. They would then be allocated to the bodyguards - presumably if destined for command roles - or to the companion cavalry or the hypaspists.

Fitting somehow into this inner circle of pages, bodygaurds and secretaries were men known as the King’s Friends. We do not know how many of these men there were, nor is it entirely clear if they were a distinct group or if the title was a rank. Perhaps the most senior of the pages or bodyguards were King’s Friends.

Finally there was a select group of workmen who had the job of looking after the royal tent. This was an impressive structure made of wooden poles and linen or woollen cloth. It contained several rooms, including among others the royal bedchamber, the chamber of the Royal Bodyguards - presumably a council chamber of some kind, the royal dining room, the outer chamber, the guardroom.

Posted by Rupert Matthews at 01:12