The 16th Century Galleass of the Spanish Armada 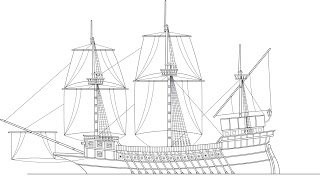 The galleass was a hybrid warship which first appeared in the 1520s and remained in use until the early 17th century. Essentially it was an oared galley fitted with an extra deck on which were mounted cannon. It was an attempt to produce a ship able to move in dead calms, or to move directly upwind, which had the firepower of a galleon. It was first produced in the Mediterranean, where it remained most popular, but within a decade or two was being used in Atlantic waters. Outside of the Mediterranean the main use of this type of ship was as a harbour guard. The oars enabled her to work in or out of a port no matter what the wind direction or state of the tides, while her guns made her able to halt any ship that was attempting to evade customs or seeking to leave without paying harbour dues. The English used them at major ports as early as 1535 and in 1588 London was guarded by two of these ships. The galleasses used in northern waters tended to be quite small and restricted to inshore work. The oarsmen were free men, hired at a rate of pay similar to that of an unskilled farm labourer. Galleasses from Italy and Spain - including those sailing with the Armada - were substantially larger warships that were expected to take their place in large scale sea battles. The oars on these ships were manned by slaves or convicts. There were two main varieties of galleass, those with the guns below the oars and those with the guns above the oars. Having the guns located lower down made for a more stable craft and enabled larger guns to be carried, but meant that the oars had to be lifted in unison out of the water every time the guns were fired. It is thought, but by no means certain, that all the Armada galleasses had large guns fitted below the oars.

Posted by Rupert Matthews at 00:28