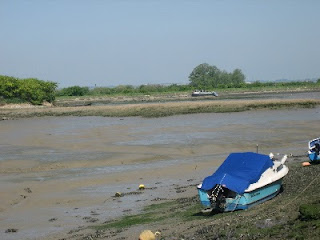 Unlike most of the “isles” to be found around the coast of Kent, the Isle of Sheppey is still an island surrounded by salt water. The island lies just east of the mouth of the Medway on the southern side of the Thames Estuary and is about ten miles long and five wide. It is separated from the mainland by a stretch of water called the Swale. This is now used only by yachts and small pleasure boats, but in the past was much used by small merchant ships heading for the Medway or for London from the North Sea. The name Sheppey means “Island of Sheep” in Old English, making this a clue to the basis of the island’s economy in centuries gone by.

Strictly speaking Sheppey should be called the Isles of Sheppey as there were originally three islands here. The largest was Sheppey itself, but the islands of Harty and Elmley once stood off its southern shore. Both of these smaller islands have now been joined to Sheppey as the tidal flats and marshes that separated them have been drained and reclaimed.

The island can be approached only by the Kingsferry Bridge that carries the A249 across the Swale north of Sittingbourne. Find The Aviatorat the junction of the A249 and A250.

Leaving the pub, drive northeast along the A250 to the junciton with the B2008. Take the B2008 east for about 4 miles, then turn left along the lane signposted to Warden Point. The coast here is eroding fairly rapidly and you will eventually find the lane is blocked off to traffic. If you continue on foot you will come to the spot where the road ends abruptly in a cliff. The wreckage of the parts of the road that used to continue on to the east can be seen on the beach below and scattered over the face of the cliff.

The first of the ghosts and spooks to be encountered on this drive roams the fields and shoreline around Warden. This is the ghost of Sir John Sawbridge who lived in Warden Manor in the 17th century. He was widely rumoured to have led the gang conducting the smuggling which was then prevalent in the eh area. He was never caught, but justice caught up with him in grisly form. He was riding out late one night - allegedly to inspect an incoming cargo of smuggled French brandy - when his horse bolted and he was thrown. Sawbridge was badly injured, and was not found until well past dawn, by which time his injuries had become fatal. He died later that day. Ever since, his angry ghost has been seen riding around this area on a terrifyingly large black stallion.

Drive south through Warden to Leysdown on Sea. Turn right along the B2231 toward Eastchurch. Turn left up a lane to the Isle of Harty. This road winds over a hill before dropping down to cross flat levels and a tidal stream named the Capel Fleet. This is all that is left of the tidal flats that once separated Harty from Sheppey. In the days before the marshes and tidal flows were drained This was a lonely, eerie place. When the chill wind blew through the reeds and dank vegetation the area seemed almost other worldly. Perhaps that is how the place got its name. In Old English, the name derives form a phrase which, in modern parlance, might be loosely rendered as “The Marsh of Monsters”.

Intriguingly, the name is fairly close to the name Heorot, the great hall plagued by a man-eating monster in the ancient English poem Beowulf. The topography of the Heorot in the poem closely matches that of the area around Harty. The cliffs on the east coast of Sheppey shine when wet, as do those in the poem, and it is possible to ride a horse down them - though only just. Other similarities are numerous, and the history of this region makes it likely that Harty was an off-shore English stronghold off a Romano-British mainland about the time the poem was composed.

It is an intriguing possibility that the Marsh of Monsters in this isolated area of Kent might have been the inspiration for the most ancient literature in the English language. Whatever the truth of this, the monsters have not been seen since the marshes were drained some generations ago.

This is an extract from Teashop and Pub Drives in Kent by Rupert Matthews.

Posted by Rupert Matthews at 03:15