The First Steam Railway in Surrey 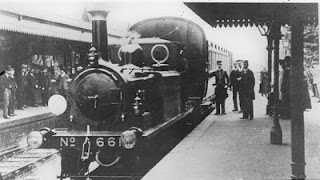 The first steam railway to be built in Surrey was primarily a goods line which opened in 1839. This was the London and Croydon Railway, which ran from what is now London Bridge station to what is now West Croydon. This line is now entirely within Greater London.

Much more difficult was the task of anticipating how many passengers might want to travel a particular route. Despite this it was a line built with passengers in mind that was the first to strike out across Surrey on a route from London to Brighton. The fact that part of the route ran through Surrey was merely coincidental.

The idea was first suggeseted in 1825 when a group of businessmen formed a company called, rather optimistically, The Surrey, Sussex, Hampshire, Wiltshire and Somerset Railway. They employed the famous bridge architect John Rennie to survey what they intended to be the first route of an extensive network, that from London to Brighton. No sooner had he begun work than the plan was dropped. Four years later Rennie was hired again, this time to survey two different routes. The first was to take in the intermediate towns of Dorking, Horsham and Shoreham, while the second was to run direct between London and Brighton. This time he completed his work, but the company foundered due to a lack of funds and interest.

In 1835 the London and Brighton Railway (L&BR) was founded and bought up Rennie’s work. This new company favoured the direct route, but the matter had to go before a Parliamentary committee, which took months to pore over the various options before finally deciding that the L&BR had been right all along. Rennie’s direct route was therefore adopted, even though it would involve the building of several expensive tunnels and bridges that could have been avoided on the longer route.

As with the earlier horse-drawn iron roads, the new railways required an Act of Parliament to compel landowners to sell, gain the right for the railway to cross rivers and other legal matters. The L&BR act was passed by Parliament in July 1837, but the MPs had introduced some variations. The railway was not to have its own London station, but to use that of the already existing London and Croydon Railway. The line would begin at Norwood and then follow the Rennie direct route, with branch lines authorised to Lewes and Shoreham.

The MPs also introduced an amendment that the L&BR had opposed. The Members of Parliament were at the same time considering a proposal to link London to Dover and Folkestone put forward by the South Eastern Railway (SER). For some reason the parliamentarians felt that there would not be enough trains coming into London to justify the bother of having two lines. They therefore stipulated that the SER and L&BR should share a line from Norwood south through the North Downs. The two railway companies would have their own lines only after that.

In the House of Lords, the railway found itself confronted by the influential Lord Monson. Monson had nothing against railways, in fact he was generally in favour of them. However, the proposed route would run very close to his home at Gatton Hall, southwest of Merstham. The house stood on a south facing slope looking across a shallow valley in which had been constructed an artificial lake to improve the view. And the railway route would be on the far side of the lake and in full view of the house. In order to mollify any objections that Lord Monson might have to this, the railway placed Merstham Station immediately outside the gates of Gatton Hall on Battlebridge Lane, almost a mile away from Merstham itself. The villagers were able to watch the trains passing within 50 yards of their homes, but had to face a lengthy walk to get on the things.

Posted by Rupert Matthews at 01:13