The English Heritage of St George 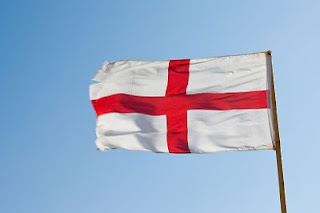 As flags go, it is stunning. A blood red cross on a white background is instantly recognisable, easily produced and clear enough to be spotted a mile away. It is a flag that England has made its own.
These days, you can see St George’s flag almost anywhere. When England is playing in an international football competition, they are everywhere. They flutter from cars, being carried on plastic struts that attach to the car windows. Larger versions are nailed to wooden poles lashed to builders’ vans and trucks. Houses have flags flying from windows, garages and garden fences. Shops are festooned with them and pubs are swathed in St George’s flags, St George’s buntings and St George’s posters.
The imagination of modern marketing men has been let loose on the once simple flag of St George. Breweries put their logos into the white quarters of the flag to link their product to the ubiquitous flags. Other flags are decorated with a silhouette of a mounted knight in armour piercing a fierce dragon with a lance. Some combine the coat of arms of England with the flag of St George by displaying three lions on the flag. Advertisements show jocular knights in armour and a surcoat displaying the flag enjoying a wide variety of products seeking to gain sales by being linked to the patron saint of England.
St George and his flag have entered the public life of England in a big way. Fully grown men dress up as St George to go to football matches or to slip down the pub to watch English cricketers take on foreign rivals on giant television screens. His flag is emblazoned on supermarket packs to show that the apples, steaks or lager within was produced in England.
In part this modern obsession with St George has got a lot to do with the marvels of modern manufacturing. Time was when flags were expensive things to buy. Coloured dyes that would remain true in sun, rain and wind were pricey to make and costly to fix on cloth. Now with new synthetic fabrics and artificial dyes, a pound or two will buy you a colourful flag that would previously have set you back half a day’s wages. Flags, costumes and outfits are cheap enough to be bought, used and discarded without much cost.
But there is also something about St George himself that captures the English mind. In the public imagination, St George is a bold, fearless and hearty chap. He thinks nothing of grabbing sword or lance to rush into battle against a ferocious dragon to save a pretty damsel. No doubt he would be just as ready to hurl himself into battle to slaughter foreign enemies of England. And nobody can be in much doubt that he would celebrate his victory with a vast platter of sausages, steaks and chips washed down with a beer or two, while belting out a singalong chant with his mates.
St George’s image is decidedly male and working class. In these days when politicians tell us that “we are all middle class now”, submerge England into a bureaucratic European Union and seek to embrace a touchy-feely empathy with the world, St George gallops out on his white horse to remind us of a very different England. When the football World Cup comes around it is Council estates and areas of smaller houses that are festooned with red and white, and it is white vans that carry the largest flags.
Big, bold, brave and determined to enjoy himself while cheerfully slaughtering his enemies, St George is seen in much the same way as the English like to think of themselves.
But what was the real St George like? How has he come to embody the more robust virtues of the English? To find the answers we must set out on the trail of the real St George.

Posted by Rupert Matthews at 05:51